When did we lose respect for stay-at-home mums?

A few weeks ago I was watching an episode of The Good Wife, a long-running drama about a woman who restarts her career as a lawyer after 14 years of being a stay-at-home mother. In it, a female character working at the law firm handed in her letter of resignation when she discovered she was pregnant. Alicia Florrick, the main character and her boss, told her that she shouldn't leave her job just because she was pregnant, and that there was no reason she couldn't be a lawyer and a mother — she didn't have to choose between the two. To this, the character replied, 'I don't want to choose…I don't have to prove anything. Or, if I have to, I don't want to'.

Her words resounded with me and I thought about them often over the following days. Why was I so focused on — and impressed by — her decision? Why did I find that moment so significant? She made a choice that thousands have made, so why did I find it so intriguing?

A main focus of feminists over the past few years has been fighting the stereotype of men as the breadwinner of the family and women as housewives or stay-at-home mums. Of course, there are many families with both parents working, either because the couple can't afford for one of them to leave their job, or because they both want to work. In the past decade, however, there's been a significant rise in the number of stay-at-home dads in the UK — as well as an increasing acceptance of them — who give up their jobs to allow their wives to work while they look after the children. There are plenty of women who work and are mothers at the same time, and that number is rising, which just shows that what Alicia Florrick said is becoming more and more true; women don't have to choose.

And yet, a perhaps unintended consequence of this fight against gender stereotypes is that we seem to have lost respect for those women who do choose. When a woman decides she wants to be a stay-at-home mum instead of a working one, we see her as conforming to an age-old gender stereotype, and may even accuse her of hindering the progress of feminism by doing so. We expect all women to break the glass ceiling, to prove that women can be the breadwinner, to show that women can do it all. In fact, we've become so focused on women being able to do it all that we've forgotten that some women don't want it all.

Not every woman wants to be a working mum. Some women want to raise their children full-time — I know I do — and that decision is theirs to make. Feminism isn't about every woman having a job and kids at the same time, it's about choice. It's about a woman having the choice between being a working mother or a stay-at-home mother, or even being a mother at all. What's more, the choice each woman makes in that regard has no impact on whether or not they're a feminist.

I'm sure you've heard the phrase 'you can't be a feminist if…' at least once in your life, if not the past month. It seems to be everywhere at the moment, and every time it pops up I hate it more and more. Feminism is the belief in social, economic and political equality between men and women. Full stop. End of. No ifs, buts or footnotes. You are a feminist if you believe in gender equality. You aren't a feminist if you don't. It's genuinely that simple. I don't know how much more plainly it can be put, or why it's so hard to understand.

Stop saying 'you can't be a feminist if…'. Stop putting parameters on what feminists can do or be. Stop trying to work out if people are feminist enough for you — they're either feminist or they're not. And stop letting others do it — call them out; make them see that they're not helping anyone. Feminism has a way to go, and we won't get there anytime soon if we're too busy telling each other we aren't good enough feminists. Anyone can be a feminist. Don't take that away. 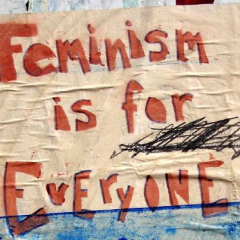 Has feminism gone too far?

When did we lose respect for stay-at-home mums?