Since the Enlightenment, Christmas as a religious celebration has all but disappeared from the art world. But even pre Enlightenment, the Nativity was shown in a wide variety of ways across the world.

Christmas has always been celebrated in a variety of ways across the globe. We eat different foods, celebrate on different days, and have different traditions, holidays, days of importance and rituals. Yet the meaning of Christmas itself is universal. Despite all the present giving, the consumerist notions, the films, the tv, and Christmas sparkle, what Christmas actually is, is the celebration of the birth of Christ. Whether you are religious, or non-religious - as I am - you cannot overlook that this is the reason Christmas was originally celebrated, and is still celebrated, by many across the world today. Such celebrations of the birth of Christ existed in the 4th Century.

The British nativity scene we see in homes today often features Jesus in a manger, accompanied by Mary and Joseph, the three shepherds and the three kings, and often donkeys or cattle. The Spanish nativity scene featured add-ons to the British scene; featuring farmers with their ploughs, washer women, bakers, caves and mountains, temples and children shown throughout the scene. But how did all this come about, and how was it depicted within art?

The earliest depiction found are the 4th-century drawings depicting the nativity scene, in Rome showing Jesus lying near a trough or basket, with the ox and donkey alongside. Mary appeared in the scene from the 5th century onwards, Joseph appearing later. Palestine had a different take on the Nativity in the 6th century; Eastern Orthodox set the nativity in a cave and still does this now. Jesus is being bathed by midwives, separate to the main scene. The kings approach from the top of the cave and the shepherds from the right. Angels appeared surrounding the scene.

The west and British nativity, rather being set in a cave was set in a stable. St Francis produced the original nativity in a stable in Italy in 1223. No midwives appear in the British version, although some Italian depictions still show midwives bathing Jesus. In the west, the mother begins to cradle her baby, rather than Jesus shown as a separate depiction. In the fifteenth century, Mary is shown to be kneeling rather than reclining as she was depicted before. In German depictions, Joseph wears a Jewish hat. In the 16th century onwards the nativity became more simplified and artistic originality came into play, with nativity scenes becoming more and more varied depedning on the artist.

By the eighteenth century, nativity scene's disappeared from art almost completely. Perhaps this is because Christmas was beginning to lose some of its original connotations. Religious importance within art had also begun to change, with modern and contemporary art becoming more commercialised and more distant from the traditional art world. Art itself was becoming modernised and moving away from traditional notions of depicting Christmas and Nativity. Yet the various corners of the globes keep their varied traditions, rituals and belief. 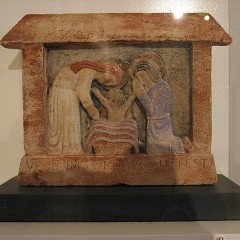 Since the Enlightenment, Christmas as a religious celebration has all but disappeared from the art world. But even pre Enlightenment, the Nativity was shown in a wide variety of ways across the world.