Bear and bird team up for a rescue mission, and to fight an exceptionally vain and bad tempered witch, all while being aided by a mole and a shaman. Why would you not play this!

Yes, why would you not play this? The description depicts a game that is worthy of the 9-15 hours of your life it usually takes to complete it, however, there is at least one reason why some would not play Banjo-Kazooie - it is now nearing 20years old. Originally released on the N64 (yes, the console that these children get WAY too excited over), I once again found myself longing for it after playing what was heralded as its spiritual successor Yooka-Laylee - just to remove the bad taste from my mouth..

I won't bore you with all the technical reasons why this game is amazing (it used clever coding to maximize performance capabilities) but instead focus on it from the artistic aspect.

Firstly, the soundtrack is awesome. Repetitive, but awesome. How it subtly changes as you move through the worlds is very immersive, and there are so many other tunes throughout, it is very advanced for the time. For example, if you go underwater, the music transitions to a harp arrangement of the tune. Love it!

Next is the dialogue. The characters themselves don't actually talk, they make mumbling noises, but each one is different, and displays their individual personalities. Translations of the mumblings are provided underneath. The Witch only talks in rhyme, which sounds annoying but can actually be quite witty. Sometimes anyway…

The character arcs throughout the game are shallow but really interesting, and you can't help but sometimes feel empathy with the the NPC's (Non playable characters), especially Clanker, the abused robot shark/garbage disposer.

The graphics are, for the time, pretty good. The characters were designed to look sharp and in focus, while large textures are used on everything else. However, all worlds look very unique, and more importantly, fun. You really want to delve into each world, and explore everything it has to offer.

This single player platform game, in which you collect musical notes, feathers, eggs, jigsaw pieces, lost birds of multiple colours and countless other nicknacks defines a great time of progression for gaming. It is a fond part of my childhood, in the same way Super Mario 64, Pokemon cards, Recess, Power Rangers and VHS is. Yes, I remember a time before DVD's were mainstream. One day children will be asking what a blu-ray is, then you too can feel old!

If you are lucky enough to own a N64 still, I recommend you go out and find the Banjo-Kazooie cartridge, otherwise it can only be downloaded on an XBOX 360, or Xbox One via Rare Replay.

This article was first published 7 January 2013 and was updated for clarity and to reference Yooka-Laylee. 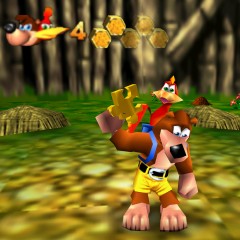 Bear and bird team up for a rescue mission, and to fight an exceptionally vain and bad tempered witch, all while being aided by a mole and a shaman. Why would you not play this!