Tracy Chapman's self-titled debut didn't just win loads of Grammy's - it got us talking about a revolution.

Puns and reference jokes aside, Tracy Chapman went from a disadvantaged and scarred young woman to a multi-millionaire musician overnight. Discussing the political & social issues of the late 1980s with simple melodies and fantastic vocal delivery, it made the listener think about the world around them, and it got people talking. Why is it still so relevant today?

Well, let's begin with the political and social side of things - 1980s America. Race is still an issue, homosexuality is still an issue, the Cold War was ongoing at the time, consumerism began to kick in, MTV exploded, and mobile phones were the size of my size 10 shoes. OK, this may not seem relevant - but it was tough living in the 1980s if you were at a disadvantage. And this was the case for a young Tracy Chapman, growing up and living in a struggling community.

While she does keep her personal life out of the spotlight, it is clear from listening to the lyrics of her debut that she didn't have it easy. "Fast Car" describes the narrator's desire to escape from their struggles, especially having to give up school to take care of their sick alcoholic father. Being raised by a single mum, it isn't clear if this song is strictly autobiographical or not, but it certainly gave a voice to many wanting to escape their struggles and never turn back.

It was also songs like these that got the conversation about working-class issues going. People were opening their minds and expressing their thoughts on being on the lower end of the social scale, and having no way to move forward. Issues such as unemployment, discrimination, mental health, etc. were finally being talked about...and these issues still exist today.

In light of recent events, I believe this album remains stronger than ever from beginning to end. More black men are being killed, there're more protests and discrimination continues throughout the world. Chapman's debut speaks about issues that are still happening today - "Across the Lines" is one such song in which Chapman sings about the pain she experiences when she sees the line "that separates whites from blacks", and the tragic loss as a result. It's a line that should not exist.

It's a revolution that starts with a whisper. 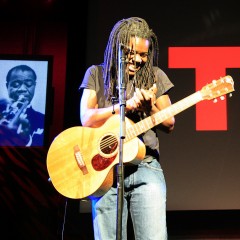 Why is Tracy Chapman's eponymous album so important?

Tracy Chapman's self-titled debut didn't just win loads of Grammy's - it got us talking about a revolution.