The story of Abigoliah Schaumaun and her struggles with being approved for a partnership visa after living in the UK for five years.

Abigoliah Schamaun may have been born in the US, but she considers London to be her home, and this home and the life she built for herself was threatened by Brexit and the UK immigration system.

Abigoliah moved to London from New York in 2014 on a work visa. She quickly established her career as a (five star) stand up comedian, met and moved in with the love of her life and created life-long friendships.

In 2019, her work visa was about to expire, so she and her British partner, Tom, began the process of applying for a partnership visa. But nothing could prepare them for the struggles they were about to face.

One of Abigoliah’s friends – an immigration lawyer – agreed to help her for free, which alleviated the financial burden of the visa process significantly. However, she still needed £3,000 for processing fees and to compile five years worth of evidence of her and Tom’s relationship – everything from their tenancy agreement and bank statements to early text messages and photos. This financial strain on top of the mountains of paperwork caused a great deal of stress for Abigoliah who has ADHD and Tom, is autistic and has ADHD.

“This was the most important paperwork of my life,” Abigoliah said.

With Abigoliah’s work visa about to expire, the couple paid for a quick decision but were dismayed to find out her visa had been denied and provided with an ambiguous reason as to why.

“Everyone said it would be fine because I'm an English-speaking white lady, and we more than met the requirements for proving that we were a legitimate couple,” she said. “87% of Partnership Visa applications are accepted – but mine wasn’t; I was devastated.”

Abigoliah was faced with the harsh reality that she might have to leave her life and partner behind to return to a country that had not been her home for years. While she still has family in Indiana, that was the only thing left for her in the States. There were no friends or job to go back to, only uncertainty and the knowledge that the visa system had failed her.

She was suddenly struck with a number of questions that she could not answer. What if she had to go back to America? Would she have to deal with the financial burden of being deported and trying to get back while still being financially responsible for everything she had in the UK? Where would her partner go? Would they both have to start from scratch in a country where they couldn’t even afford healthcare?

“It was all very scary and real,” Abigoliah said.

Abigoliah appealed the decision and applied for a new work visa so she could remain in the UK while waiting for her court date. However, after applying for another work visa, she now had a flag on her record that she had been denied a partnership visa. This resulted in her being detained at the UK border and bombarded with questions, waiting to find out if she would be allowed back into the country or if she would be deported on the spot.

After explaining her situation to the customs officer, the hostility ceased and she was allowed to enter the UK and return to her home to face a court tribunal where the fate of her appeal would be decided.

“Going to court and being detained in court is scary and so is the waiting; you just don’t know who you’re gonna be with or where you’ll be,” Abigoliah said.

Abigoliah appealed this decision using the Article 8 Human Rights Act, which protects the right to respect for your private and family life. However, this option may not be available soon, as the government has proposed to replace it with a “modern bill of rights.”

During the court appeal, the opposing lawyer made the case that the couple could live in the US instead, and as a UK citizen, Tom could fly back and forth between the two countries to receive treatment from the NHS for his autism, ADHD and other health concerns. But this was far from feasible, Abigoliah said. In response, friends and family members spoke on the couple’s behalf, hoping the judge would rule in their favour.

“It was a real testament to the support I found here,” Abigoliah said. “It proved to me how much I love being here and how much of a community I have here.”

Despite the impact winning the appeal could have, it would not be a permanent solution. The partnership visa only lasts 2.5 years, on a five or ten year plan. Every 2.5 years, Abigoliah would have to reapply for her visa, going through the same difficult and expensive process all over again.

“Your life is up in the air constantly, it's hard to lay down roots, establish a life when you just don’t know.”

Despite this long and difficult process that is still not over for Abigoliah, she used this experience as a business opportunity by turning it into a standup comedy show. She describes her show – “Legally Cheeky” – as a “funny romp through the UK immigration system.” It will be at Edinburgh Fringe August 4-28 and gives audiences the opportunity to find out the outcome of her appeal. 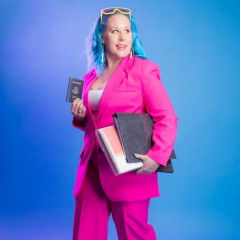 The trials and tribulations of the UK visa system

The story of Abigoliah Schaumaun and her struggles with being approved for a partnership visa after living in the UK for five years.