Priti Patel’s polarising ‘Nationality & Borders Bill’ seems set to be passed very soon by Parliament. Australia has implemented very similar policies of ‘offshore processing’ and ‘boat push-backs’, what can be learnt from this?

Priti Patel is certainly no stranger to controversy and has found herself in political hot water in the past. Yet, ‘The Nationality & Borders Bill’ has elicited a particularly vehement response across the spectrum – Tory MPs, Labour MPs, celebrities and of course the wider public have all publicly decried the proposal.

For a brief moment this seemed to have an effect as it suffered multiple defeats in The House Of Lords. This does not necessarily mean however that the bill has been repealed nor will the party simply give up, something that is evident in the bill still being backed by an overwhelming majority of Conservative MPs.

One of the main points of contention outside of the ethical implications is a much more pragmatic one – effectiveness.

This begs the question of if the controversial bill will actually achieve what it purportedly sets out to do. The Conservatives believe it will do three things,

“1. To make the system fairer and more effective so that we can better protect and support those in genuine need of asylum

2. To deter illegal entry into the UK breaking the business model of criminal trafficking networks and saving lives

3. To remove from the UK those with no right to be here”.

There are a number of measures that the bill proposes which will be used to achieve these three ends, but there are two in particular drawing ire and similarly did so when they were adopted in Australia; ‘offshore processing’ and ‘boat push-backs’.

A common critique from the opponents of the bill however is that it is ineffective and legally subversive, on the grounds that they are not only ineffectual but they contravene the non-refoulement principle of The Refugee Convention (1951).

Parallels are also being made to that of legislation passed ‘down under’ with Australia’s ‘Pacific Solution’ and Migration Amendment (Excision From Migration Zone) (Consequential Provisions) Bill 2001.

So, what can we learn from ‘down under’ and their policies of offshore processing and boat pushbacks?

The ‘Pacific Solution’ in Australia introduced the controversial legal principle of ‘offshore processing’. This process “... involves asylum seekers being detained and undergoing health, security and identity checks in Australia, before being forcibly transferred to Nauru or PNG at the earliest possible opportunity and undergoing refugee status determination (RSD) in those countries.”

This policy was introduced by John Howard, who was Australian PM between 1996-2007. Howard’s rationale for offshore processing can be encapsulated in his Election Policy Speech (2001); “we will decide who comes to this country and the circumstances in which they come.”

What is often heralded as a turning point from when refugees became perceived as a threat was the ‘Tampa Affair (2001)’. This saw asylum seekers aboard a sinking fishing boat being rescued by a freight ship named ‘Tampa’, the captain of which ignored the government’s refusal to allow him entry into the territory of Australia. Instead,  four-hundred and thirty-eight asylum seekers were taken up to the territory of Christmas Island. Within weeks, Howard and the Nauru Government erected a detention centre to process future refugees.

The consensus on the policy appeared to be that it had been largely ineffective for a number of reasons.

Objectively, many of those detained were virtually always found to have been actual asylum seekers. This means that these genuine refugees were condemned to these detention camps unnecessarily, whilst being subjected to appalling conditions and treatment.

Not only this but John Menadue (Former Australian Secretary of the Department of Immigration), stated that seventy-six percent of asylum seekers through the past decade have actually come via air – not sea.

The ‘Nauru Files (2016)’ found approximately two-thousand cases of sexual abuse occured at Nauru – sexual assaults which were often targetted towards children, which would lead to untold mental duress. In addition to being illegal and morally repugnant, the behaviour also contravenes the ‘best interest’ principle of the Convention On The Rights Of The Child (1989).

Even when the government offered a shred of humanity by offering medical assistance through 'Medvac', asylum seekers were detained in hotels which led to public backlash and often ineffective treatments. The legislation was subsequently repealed that same year which means healthcare is grossly neglected.

One would think that all of these political, legal and frankly humane misgivings would not go unnoticed. You’d be right, and the centre’s were branded as constituting “cruel, inhuman, or degrading treatment” by The International Criminal Court, yet they decided not to pursue further action under the precedent of Article 7 of The Rome Statute.

Only approximately sixty-thousand people have arrived via boat over the past forty years to Australia. The Pacific Solution can therefore be interpreted not only as ineffective given all of the litany of evidence, but as a disproportionately cruel solution to a problem which wasn’t even necessarily that big an issue.

The policy of push-backs is quite literally the turning away of migrants and returning them to their states. The Australian government defines it as “the safe removal of vessels from Australian waters, with passengers and crew returned to their countries of departure”.

Similarly to The Pacific Solution, the push-back policy has also attracted comparable yet varied critiques.

Agnes Callamard’s (UN Special Rapporteur) ‘Unlawful Death Of Refugees And Migrants - Report', suggests the policy not only violates the non-refoulement principle of The Refugee Convention (1951) but deliberately puts people in treacherous conditions at sea or at home in the countries they fled from. “This may amount to excessive use of force by proxy”, writes Callamard.

Peter Dutton (Former Australian Immigration Minister) has however defended the policy, insisting that “Since Operation Sovereign Borders commenced we have not had a drowning at sea in three years”, proceeding to suggest that they had removed the incentive for people-smugglers and dissuaded them. This is despite allegations that the government actually engaged with these aforementioned smugglers, allegedly paying some to turn-back.

The effectiveness of the policy is difficult to ascertain given the unavailability of certain types of stats, and whilst we know how many people have been turned away, we do not know how many made it regardless. Yet, the ethical and moral objections alone are enough for many critics to object to the policy.

Lessons from down under

The critique of the bill appears to be well founded given not only the moral and ethical considerations, but the fact that our government does not appear to be taking into account the failing(s) of Australia. Priti Patel’s legislation therefore seems doomed to repeat the same mistakes (if not worse). 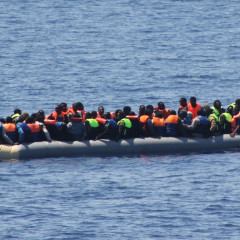 Priti Patel’s polarising ‘Nationality & Borders Bill’ seems set to be passed very soon by Parliament. Australia has implemented very similar policies of ‘offshore processing’ and ‘boat push-backs’, what can be learnt from this?