Our picks for the past week’s best music releases for you to get your ears around. Check out what we have to say and give them a listen.

Hot off the back of winning the Mercury prize last year, singer-songwriter Arlo Parks has released her first single following the critically acclaimed record Collapsed In Sunbeams. ‘Softly’ sees Parks writing her songs in a different manner melodically, seemingly influenced by disco, whilst still implementing her personal and introspective lyrics. The track is bouncy and fun, but is just as intimate and intentional as her past work, showcasing her artistic evolution as well as her authenticity. The track is about yearning, the feeling of fragility when in the dying days of a relationship, and Parks manages to exert this emotion through her sombre vocals, but through a relatively spritely and smooth instrumental.

The Linda Lindas - Growing Up

On the announcement of their debut album titled Growing Up, the Linda Lindas have released their first single from the upcoming album of the same name. The teenage four piece’s new track is a feel good, coming-of-age inspired track that is packed with energy and punk riffing. The group are known for their attitude, but their instrumental is accessible, utilising simple but crunchy power chords and gain-laden basslines. Vocally, the track is nothing impressive, but flows through multiple sections with catchy melody and phrasing in the band’s casual punk manner. ‘Growing Up’ is a great introduction to an explosive band, and if the track is any indication, their next record will certainly be one to look forward to.

Flume has released a new collaborative track with vocalist MAY-A titled ‘Say Nothing’. The  song is the first to be debuted from the producer’s upcoming record ‘Palaces'. Flume has not released a full length since releasing two EPs back in 2019, and ‘Say Nothing’ is an expertly produced pop banger that was inspired by the artist’s return to Australia during the Covid-19 pandemic. MAY-A stands out as a major draw in the track, her vocals soothing to begin with, before the powerful belting of the song’s concluding crescendo. Flume is back with an almighty bang with ‘Say Nothing’, and his unique industrial production and MAY-A’s impressive vocals give this electronic pop track an interesting edge.

Buzzard Buzzard Buzzard are a Welsh four piece taking the rock scene by storm, and their new track A Passionate Life is a melancholic, classic rock ballad that proves the extent of their talent. Making use of Elton style keyboard parts mixed with an understated vocal that softens the track as a whole, A Passionate Life is perfect for a flashlight in the air moment on tour or a little kitchen dancing in the comfort of your own home. With a chorus of ‘La la la’s’ nearer the tail end of the track not too dissimilar to the likes of Hey Jude by The Beatles, sonically Buzzard Buzzard Buzzard have created a track that's could only be described as jazz infused rock and it's definitely one you need on your most chillest of playlists.

The New Twentys - Heart’s In The Right Place

Formed in the summer of 2020, The New Twentys have already been making their mark on the indie rock scene. New track, Hearts In The Right Place takes elements from pop punk and rock to create a unique blend of confident and catchy melodies that make you want to dig out your leather jacket and the guitar you left in the loft 10 years ago. Using a guitar riff similar to the likes of Blink-182 at the start of the track helps lead into the song's energy and builds character. The chorus has a mid tempo that instantly reminds you of summer nights at festivals, it's not too much that it punches you in the face, but has the perfect balance of energy and a laid back vibe. Heart’s In The Right Place is a welcoming and infectious pop song that everyone will love.

Fresh from recently touring the US, Hope Tala is one of the most exciting names in new music. New single Party Sickness takes inspiration from messy nights and having fun at house parties, it's the perfect antidote to the post new year party blues. With a voice similar to the likes of Eliza Doolittle, Party Sickness is an R&B jazz infused track that may remind you of times gone by whilst having a modern fresh theme that runs throughout, making the song stand out from the crowd – receiving praise from the NME, Rolling Stone and BBC Radio 1 among others. Hope’s vintage style vocals adds softness to the single whilst synthesized beats running in the background bring the track to life, adding personality and rhythm. Party Sickness is perfect for your morning coffee or midnight drives. Regardless of where you listen, this track is sure to become a firm favourite.

Ash Edmonds and Faith Martin contributed to this article 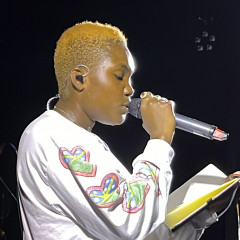 Our picks for the past week’s best music releases for you to get your ears around. Check out what we have to say and give them a listen.