Portal 2 is the greatest puzzle game I've ever played. Sharp wit and an endlessly entertaining gameplay loop define it, along with a surprisingly mournful atmosphere at times.

The first Portal was a delightfully twisted little puzzle game. The main character, Chell, wakes up in a mysterious laboratory and is instructed by an AI to journey through a testing centre taking part in increasingly difficult and dangerous tests. Her one tool is something called a portal gun, a firearm that shoots out one blue portal and one orange portal, depending on the button pressed by the player. If she passes through one, she comes out the other. This single mechanic is stretched to its absolute limits during the game, in extremely creative ways. Momentum, for example, is conserved when passing through the portals, which once discovered by the player, opens up the possibility of wildly launching themselves off of ledges to fall through one portal and be launched like a rocket out of the other.

As she progresses through the rooms, the AI, which calls itself Glados, begins to shift from a neutral, instructive voice, to one that speaks with sinister, and occasionally malicious undertones. Early in the experiments she states: "Please note that we have added a consequence for failure. Any contact with the chamber floor will result in an 'unsatisfactory' mark on your official testing record followed by death. Good luck!" The player begins to suspect Glados does not have their best interests at heart.

This suspicion is exacerbated by messages scrawled in hidden rooms around the testing centre, including a recurring phrase "the cake is a lie". Given that promises of cake at the end of the sessions seems to be the main motivation Glados gives Chell, that is a disturbing proclamation.

Of course, the AI turns out to be evil. Chell fights her, wins, but is rendered unconscious in the final moments of the game.

Fast forward to Portal 2 and Chell has spent an undisclosed number of years in cryogenic storage within the testing facility. She wakes up to discover the building has fallen into disrepair, and must navigate the collapsing structures using the portal gun from the first game.

Portal 2 is a much larger game than its predecessor. To start with, the actual environments are much more varied. As Chell progresses through the game the player begins to realise just how vast the place is. There's an odd sense of loneliness. The building is falling apart. Walls have split, metal has corroded. It all combines to make the world feel dead. Chell doesn't even speak. As per videogame tradition she's a silent protagonist. Journeying through the game there are moments of unscripted quiet that feel inexplicably mournful. Realising that the world outside has either forgotten about this place, or has ceased to exist, creates a tomb-like atmosphere. It makes the little glimmers of levity more appealing. The player latches on to things like the messages written on the wall, the little radio that plays a jazzy rendition of the first game's main theme, a malfunctioned sentry bot that squeaks threats of violence at Chell as she carries it around harmlessly. The most important things that break the silence of the world, however, are the testers.

There are three, this time round. A dim-witted but largely well-meaning AI named Wheatley (voiced to great effect by Stephen Merchant), a resurrected Glados, and Cave Johnson.

Every tester is phenomenal. Distinct in their personality types and their comedic roles, they speak with a level of unhingedness that makes their dialogue sparkle and keeps the player on their toes. They'd each be the best character in any other game, but in Portal 2, Cave Johnson is easily my favourite. Voiced by the legendary J.K Simmons, this loud-mouthed, fast-talking business tycoon is brought to the player through a series of pre-recorded messages directing them through some of the first ever tests that the testing centre came up with. Astonishingly amoral, every single line uttered by Johnsons is pure gold. It's easy to see why his company became so messed up given his very loose grasp on other people's mortality.

"Those of you who volunteered to be injected with praying mantis DNA, I've got some good news and some bad news.

"Bad news is we're postponing those tests indefinitely. Good news is we've got a much better test for you: fighting an army of mantis men. Pick up a rifle and follow the yellow line. You'll know when the test starts."

Moments like this had me in stitches when I first played through the game. Considering how grim the world is, having characters like Johnson fill in the silence pays dividends in keeping the game tonally upbeat. The gameplay is more complex in the sequel, and having comedic dialogue in the background helped keep me sane during certain puzzles that would otherwise have had me gnawing my controller in frustration.

The Portal series is at its best in these moments. They give you mentally stimulating challenges set in a sinister and broken world, then bash you over the head with witty, narcissistic monologues from the few voices left in the decaying laboratory. Somehow these wildly different tones mesh together to form an endlessly enjoyable experience that, by the time the end credits roll, leaves the player wanting more. 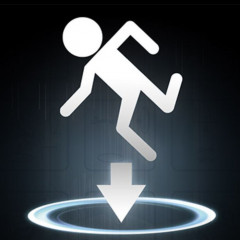 Portal 2 is the greatest puzzle game I've ever played. Sharp wit and an endlessly entertaining gameplay loop define it, along with a surprisingly mournful atmosphere at times.