The magnum opus of Team Starkid's YouTube musicals. This Disney parody went above and beyond simple satire to deliver a cosmic blend of creativity and hilarity.

Team StarKid is a group of musical enthusiasts who were thrust into the limelight in 2009 after uploading a performance of their free-to-attend, practically budgetless show A Very Potter Musical onto YouTube. Pretty soon the cast found themselves with a hit production on their hands, garnering millions of views and leaving them with the idea that 'hey, maybe we should do that again.' Since then, StarKid have produced 11 feature-length musicals, all of them uploaded to YouTube and funded by Kickstarter campaigns along with physical ticket sales. Over the years they've put on some excellent shows. They specialise in comedy, more specifically parody, with the majority of their musicals based around pop culture icons like Batman and Star Wars. Ani is a personal favourite, and A Very Potter Musical will always be a superb debut, but it's their Disney parody, Twisted that earns the right to be called their magnum opus.

Twisted revels in mocking its source material. It's primarily based around Aladdin — although it takes frequent shots at Disney in general — and reinterprets the film's antagonist Jafar as a well-meaning Vizier fighting against corruption and a world that inexplicably hates him. It has obvious parallels to another musical, Wicked. Both retell the stories of classic villains with an anti-hero twist. The similarities are even referenced in the opening number of Twisted. Jafar describes a story reminiscent of Wicked's plot to a bookseller, who replies: "Oh you think you're better than me just because you can read?" This utterly ridiculous misinterpretation of Jafar's intentions occurs throughout the entire musical.

As an opening song 'Dream a Little Harder' sets the tone perfectly. It parallels 'Belle' from Beauty and the Beast, except instead of the townsfolk calling out "Bonjour!" as Jafar passes, they instead shout out in equally jovial tones, "F**k you!" Classic comedy. The delivery of every line uttered by the townsfolk is hysterical. So many top-tier jokes are packed into the verses, if I wanted to repeat the highlights here I would have to transcribe the entire script. But what really makes 'Dream a Little Harder' the ideal kick-off point for the musical is how it sets up Jafar's character. Taking inspiration from a tried and tested comedic dynamic, Jafar is very much the 'straight man' of the show. Enthusiastic, forthright, and unwaveringly kind-hearted, Jafar is undeterred by the various insults flung at him during the song. His only moment of frustration comes when he bemoans the fact that every citizen in the kingdom seems to be so preoccupied with hating him and dreaming of a better life that they miss out on actually helping themselves and each other.

He really is the anti-Disney character. Instead of wishing upon a star and relying on good looks to get by, he plans ahead, and uses science and reason to actively push for an end to injustice. As a certified Disney cynicTM it does my soul good to see the vacuous messaging of Disney's properties ripped apart. In Twisted, the protagonist is not externally beautiful, the so-called romance is outed as creepy and deceptive, and the conclusion is a moment of bittersweet irony with no room for the dozens of sequels Disney executives would have pushed for.

I'm exaggerating my dislike for Disney, but I really am always happy to see a piece of medium rail against the standardisation of storytelling that the house of mouse has come to represent. Twisted's narrative takes many turns, with Jafar desperately trying to keep the kingdom afloat whilst struggling to resist the temptation to let his morals give way to more effective, but ultimately corrupt decisions. He clashes with the princess' naivety and undergoes significant character development as his personal philosophies are challenged.

Already a genuinely compelling plot, Twisted shines even further with its deployment of StarKid's signature staples, comedy and music.

The comedy comes from how it reinterprets the original film. The character of Aladdin is the best example of this. Riffing off the fact he is a complete liar in the source material and receives zero consequences for his actions, Twisted's Aladdin is a sociopathic thief whose main goal is to sleep with princess. Twisting his romantic motivation from a love at first sight narrative to one where the 33-year-old creep just wants to hit it and quit it is a stroke of genius. It fits so well within the issues people have with the original film, taking it to a new extreme and getting a ton of laughs whilst doing so. Superb reinterpretations like this occur so often in the musical. One of my favourites has to be the portrayal of Achmed. If you don't remember Achmed from Aladdin, and let's face it, why would you, he is the random suitor that storms off screen after Jasmine sets her tiger on him. Making the point that violently assaulting the leader of another nation is a big no-no in politics, Twisted depicts Achmed amassing his armies to retaliate against the insult, engaging in one of my favourite musical numbers of all time 'No One Remembers Achmed'.

Musical excellence is the cornerstone of a good StarKid production, and Twisted has that in spades. The songs are split between jokey tunes that bolster the parody elements, and several intensely emotional and surprisingly well-written. Lines like "the question then is whether it is nobler in the mind / to be well-liked but ineffective, or moral but maligned", and "What remains of a man, once that man is dead and gone / only memories and stories of his deeds will linger on / But if a man's accomplishments aren't in the tales they tell / are the deeds that go unheralded his legacy as well?", have no place in a silly parody.

But Twisted is not just a silly parody. It goes beyond that, creates its own messages, builds its own story. Somehow, and this may be a controversial opinion, it greatly improves on its source material. It's a beacon of originality. Jafar is one of the most well-written protagonists I've ever come across. Twisted is an unexpected masterpiece. Check it out. The best thing about StarKid is how accessible they are. Unlike Broadway musicals, their productions are readily available on YouTube for the reasonable price of absolutely free. 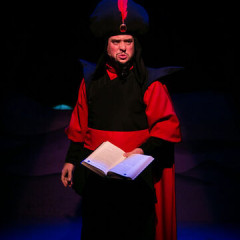 The magnum opus of Team Starkid's YouTube musicals. This Disney parody went above and beyond simple satire to deliver a cosmic blend of creativity and hilarity.