It's in broader terms that Leo Sawikin yearns for somewhere new, and it’s with the quietly epic ‘Row Me Away’ that he proves his worth as a songwriter.

Wanting to be somewhere else is a feeling we’re probably all all too familiar with, a year and a half into a seemingly never ending pandemic. But it’s in broader terms that Leo Sawikin yearns for somewhere new, and it’s with the quietly epic ‘Row Me Away’ that he proves his worth as a songwriter.

‘Row Me Away’ is a song which draws from all corners of music genre and history in order to make its point - that the familiar made new is the ultimate reset. It’s a song which displays its influences proudly on its sleeve, with 90s grunge elements mixed in carefully to its folk-rock sensibilities.

The video makes use of juxtaposition in the form of natural versus manmade elements. Sawikin begins the video shut up in a black box with neon lights around him and an overall claustrophobic nature. The lack of natural light brings Howl Peak Production’s directorial vision to life, encapsulating a mental state which feels stagnant and oppressive, in direct opposition to the latter part of the video.

Once Sawikin breaks free, he is seen walking on a beach, amongst trees and waterfalls, in his bid for new pastures. The video perfectly illustrates the creative and mental benefits from exploring somewhere new, be it physically or mentally changing your surroundings. Sometimes what we need is a catalyst to help us get out of there, but it’s always better when we do.

‘Row Me Away’ by Leo Sawikin is out now. 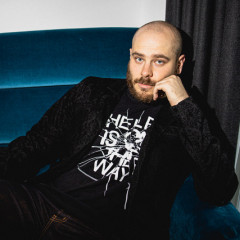 Leo Sawikin escapes with ‘Row Me Away’ music video

It's in broader terms that Leo Sawikin yearns for somewhere new, and it’s with the quietly epic ‘Row Me Away’ that he proves his worth as a songwriter.