“Peter Barret certainly gave his great grandmother, Alice Hawkins, the credit she deserves for fighting the courageous battle for women’s rights to vote!”

From the outgo of Barret’s talk at the Friend’s Meeting House, his pride and passion for his great grandmother’s cause was evident. His energetic tone and strong eye contact with his audience helped enhance Alice’s already incredible story. From her arrest after besieging the doors of parliament in 1907 to Alice’s first vote, aged 63. Alice Hawkins’ life is one that needs to be recalled to all nationwide and appreciated for she is responsible for one major positive societal change. As a woman, this was beyond inspirational!

Most magnificent was the extensive collection of suffragette memorabilia that had remained in the family and was presented to the audience. It’s not every day that you get to be sat a few meters away from lifechanging objects in history, such as the suffragette sash! Barret didn’t simply refer to these objects however, instead he described their purpose in history and the meaning behind them in such clear detail, adding to their splendidness. I felt reassured throughout the entire presentation that he could answer any question I wished to ask.

High praise as well must be given to actress Ruth Pownall who represented Alice and her cause tremendously. Dressed precisely like the suffragettes of the day, she beautifully recited to words of Alice and her fellow suffragettes, adding to the audience’s engagement with the piece. Her minor costume alterations and accent changes clearly defined both a change in character and time. Just when I thought she couldn’t possibly be any more talented, Pownall sang the verse which had been sent on the front of a postcard to Alice in such an angelic voice. “Votes for women!” she cried, and I certainly felt as if I was watching Alice in the early 1900s.

If you’re free to watch Peter Barret and Ruth Pownall’s presentation at the fringe on 20th June at 3pm then certainly grab tickets! I can’t express enough how interesting and powerful Alice Hawkins’ story is as leader of the Suffrage movement in Leicester.

Peter Barret certainly gave his great grandmother, Alice Hawkins, the credit she deserves for fighting the courageous battle for women’s rights to vote! 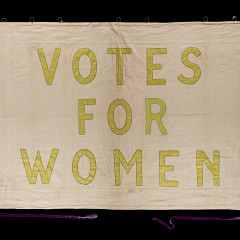 “Peter Barret certainly gave his great grandmother, Alice Hawkins, the credit she deserves for fighting the courageous battle for women’s rights to vote!”