It's out! ‘Do What I Want’, the life-enhancing new single from one-to-watch Allegra - and the shiny-happy video that goes with it – that notched up a whopping 350k views in its first weeks of release.

‘Defiant, empowering and inspiring!’, ‘Makes me feel HAPPY!’, ‘Feels like heaven on a cloudy day’ and, er, ‘Glitter bath!’ are just a tiny handful of the adoring reactions to ‘Do What I Want’, the life-enhancing new single from one-to-watch Allegra - and the shiny-happy video that goes with it – that notched up a whopping 350k views in its first weeks of release.

Only 18 but with four years of music-making under her belt (and it’s not just any old common-or-garden belt!) Allegra had already earned her pop chops before dropping this new belter. A growing fan base were totally on board with Allegra’s effervescent brand of melody-making, with her unique takes on modern classics by Billie Eilish, Dua Lipa, Lewis Capaldi and Selena Gomez. Those made people sit up and take notice, but Allegra always wanted do it her own way - from the ground up. Which is where ‘All About Us’ came in, her 2019 breakthrough single. Produced by Scott Stoddart of Dasco, it was loved, and made its way onto the Music Week charts. So far, so great… but then, you know, Corona.

But not one to be floored by a global pandemic, Allegra has grabbed these crazy times by the horns and – from the glamour of her own bedroom! – come up with the perfect pop retort, ‘Do What I Want’. The title says it all, a defiant drop from a young woman who knows her mind, an uplifting burst of pop from someone whose biggest fear during endless lockdowns was losing her creativity. Allegra needn’t have worried.

Add to the mix a Rollacoaster cover for their A/W issue, a Kiss FM first play and an appearance on BBC Music’s flagship show, Playlist, and it’s pretty clear that doing what she wants looks really good on Allegra! 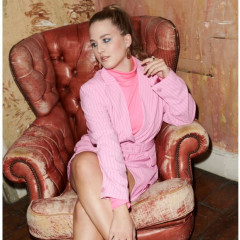 "life enhancing": the new video from Allegra is here!

It's out! ‘Do What I Want’, the life-enhancing new single from one-to-watch Allegra - and the shiny-happy video that goes with it – that notched up a whopping 350k views in its first weeks of release.