Following in the same footsteps of their previous releases, rising stars Aliensdontringdoorbells return to invade your screens and speakers with their latest music video ‘Daylight’.

Following in the same footsteps of their previous releases ‘Story’, ‘Slipping Away’ and ‘It’s Your Night’, rising stars Aliensdontringdoorbells have returned to invade your screens and speakers with their latest music video ‘Daylight’.

Enlisting a team of creatives which includes producer Jeff Kanan (Michael Jackson), mixing and mastering by David Bascombe (Tears For Fears), Kevin Dean (Drums), Earl Forbes (Bass) and director Ben Thornley (Sitcom Soldiers) as well as a strong cast, the idea of Daylight’ was to bring a bit of daylight into people’s day.

Filmed in Northern England (just outside Manchester), the viewer witnesses a Sci-Fi romance complete with soldiers, medical laboratories, alien manhunts and beautifully choreographed dance sequences. A female alien held captive for experimentation meets a janitor at the facility and as they look at each other through a screen a spark is ignited.

Dorian Foyil’s fluid electric guitar blends well with the celestial keyboard tone by Christian Pearl which softly glides through the track without needing to resort to over-the top sound effects which can sometimes happen with this subject matter.

The slick three part vocal harmony is pleasant to listen to as the couple run across fields evading capture whilst an angry antagonist looks on into the distance. The visuals and linear story are similar to Guillermo Del Toro’s award-winning film ‘Shape of Water’ with themes of forbidden love, warmth and the desire for freedom.

To summarise, ‘Daylight’ is a real feather in Aliensdontringdoorbells cap as it showcases their wide-ranging talents and it truly is out of this world so get ready to be transported! 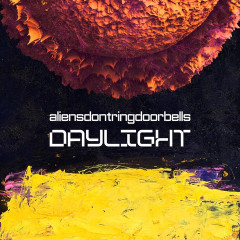 Following in the same footsteps of their previous releases, rising stars Aliensdontringdoorbells return to invade your screens and speakers with their latest music video ‘Daylight’.