Singer-songwriter and multi-instrumentalist Jonny Ong has released the official music video for his latest single ‘Chloe’ which proceeded after previous releases ‘Isolation’ and ‘Fools'.

Singer-songwriter and multi-instrumentalist Jonny Ong has released the official music video for his latest single ‘Chloe’ which proceeded after previous releases ‘Isolation’ and ‘Fools’.

Created by Alvaro Ortega, the vibrant animation accompanies Ong’s tale of realisation that a female only known as Chloe was not who she seemed to be as he sings “Chloe how do you sleep?” We see Ong performing the track on electric guitar and handpan alongside several talented musicians whilst a striking female (modelled by Rosanna Wallis) walks past the slithering snake and beautifully constructed Sixties psychedelic patterns.

The chorus sticks in your head as the rich Mexicana-esque trumpet by Yelfris Valdés pours out as the groovy rhythm courtesy of Johnny Thwaites (Bass) George Willets (Drums), Riduan Zalani (Pandeiro and Shakers) and Satin Singh (Tabla) keeps the song fluid.

The song’s production is clean with mastering done at Abbey Road Studios with Scott Knapper mixing the track. Jonny Ong opted to co-produce the track with Callum Rose and the finished article is this amalgamation of jazz, pop, elements of world music and psychedelic rock that not only blends well together but suits Ong’s vocal style.

To summarise, ‘Chloe’ is well-written song with a cinematic soundtrack music backing and a radio friendly voice and Jonny Ong can add it to his growing selection of entertaining songs which also make you think. 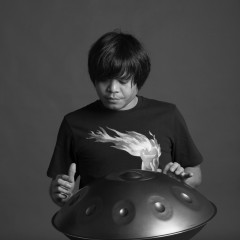 Singer-songwriter and multi-instrumentalist Jonny Ong has released the official music video for his latest single ‘Chloe’ which proceeded after previous releases ‘Isolation’ and ‘Fools'.