Hip-hop artist Steven Malcolm is a rising star in the genre from Michigan in the United States. Having already secured a whopping 41 million on-demand streams, 2 million Spotify streams and 1.2 million YouTube views for the original ‘Fuego’ video, Malcolm has released the ‘Fuego’ (Remix) with reggae/dancehall  star Shaggy with a brand new music video.

The cinematic visuals are directed by Tyler Dunning Evans whose previous credits include Malcolm’s ‘Summertime’ and the Steve Aoki/Backstreet Boys duet ‘Let It Be Me’ whilst the song’s production blends Latin guitar tones (similar to those used in the hit ‘Despacito’ ), Caribbean rhythms and some  American hip-hop vibes for good measure to create an audio cultural melting pot.

Malcolm and Shaggy are seen traveling across an unidentified city at night as they try to outrun a female crime boss and her crew following a deal which did not quite go according to plan. With ‘Fuego’ being Spanish for ‘Fire’, close-ups are used  on lit cigarettes, lighters and even a flare gun to convey a sense of danger whilst Steven raps “I got work all on the table/Yeah, my bros on payroll.”

The remix was produced by Social House’s Anderson ‘Scootie’ Michael who has collaborated with pop megastar Ariana Grande on several of her hit singles including ‘Thank You, Next’ and ‘Boyfriend’ and he has been able to capture Shaggy’s “Jamaican patois” and Steven’s rap skills perfectly.

In conclusion, the remix of ‘Fuego’ is a fresh approach to Steven Malcolm’s track which mixes several genres and styles whilst maintaining the signature sound which is responsible for his growing fanbase. Grammy-Award winning Shaggy adds to the song with his rich music roots and desire to champion new artists and it has got to be said that this pairing is pure ‘Fuego’. 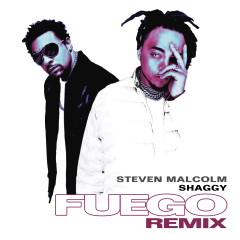 Shaggy and Steven Malcolm team up for 'Fuego' (Remix)