Kris James is gearing up for his biggest release yet. Due for release on 5th June, ‘Naive’ is the perfect song to tell his story (so far).

Kris James is gearing up for his biggest release yet. Due for release on 5th June, ‘Naive’ is the perfect song to tell his story (so far). His extraordinary tale is that of a fierce musical talent finding his way to the light, a backwards journey from pop stardom towards authenticity as the singer of his own songs. “Guess I was naive / Didn’t spot the trouble / Now, hey, I’m fine on my own” sings James with a self-assurance we should all aspire to, owning up to his past mistakes with a shrug, and no more than a fleeting backwards glance. The exuberant instrumentation and Kris’ ever-impressive vocal performance really highlights the newfound confidence and carefree attitude which Kris James is now sporting.

Self-penned by Kris James himself alongside his co-writer Stewart Boyle, the track was written in James’ hometown of Liverpool and recorded in London at The Cabin in Tileyard. The lyrics truly represent a maturation of James’ sound, showing him to be something of a chameleon when it comes to reinventing himself again and again. Of the track, James himself says that the song is about being in a toxic situation where you don’t realise how badly the other person is treating you until you remove yourself from the situation. “This is a song for all the survivors out there who end up having the last laugh,” says James, “it’s a song about overcoming adversity!”

‘Naive’ is released 5th June 2020, with the rest of Kris James’ debut full-length, The Highs and Lows of Love and Life, following later in the year. 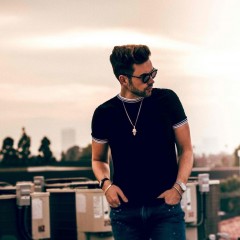 Kris James is gearing up for his biggest release yet.

Kris James is gearing up for his biggest release yet. Due for release on 5th June, ‘Naive’ is the perfect song to tell his story (so far).