Unity through the arts

New ships are launched every day along the banks of the river Thames, but none are quite like the Ship of Tolerance - an award-winning art installation premiered on the Royal Victoria Docks this Summer. I attended the launch of this inspiring piece of art on Friday 30 August, watching it bob up and down the Thames as open arts workshops attracted families strolling along the riverside.

The ship is “dedicated to inspiring young people through the universal language of art”, created through a series of workshops at refugee centres and primary schools across the country. Masterminded by Ilya and Emilia Kabakov, it is a tribute to the hope for peace in the 21st century.

“The Ship of Tolerance is a very interesting project in the sense that it does bring people together. Repairing broken relationships, establishing connections, somehow clarifying goals not only for the children but strangely for adults as well”.

She spoke at the launch beside her artwork, conveying in calming yet passionate tones her resilient optimism for a more united world.

And as if a symbol for this hope, the young climate activist Lilly Platt, only 11 years old, was presented with her Young Environmentalist Award at the launch. Speaking with confidence beyond her years, Lilly stole the show by enlightening us with her own vision of peace for the future, connecting art to action.

The Ship of Tolerance launch also marks the beginning of the Totally Thames Festival, an unmissable month of events promoting the Thames as a source of inspiration for arts, culture, heritage and education. This season of over 100 events is designed for families and scholars alike to delve into the history of the river. The website totallythames.org provides all necessary information for any eager adventurers.

There is no place more apt than the Royal Victoria Docks for the launch of the Ship of Tolerance and Totally Thames. With City Airport planes flying overhead, and the Emirates cable cars cruising above, this is the Easterly hub of London journeys. The canvasses which form the ship, once spread across the world, now congregate in this area to mark the power of international collaboration in the name of art and action.

If you wish to see the inspiring Ship of Tolerance head down to the Tate Modern from the 4th September to see it in its new home. 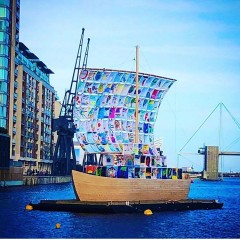 The Ship of Tolerance

Unity through the arts