‘Ready To Run’ is the breakout debut record from Americana/Country brother-sister band The Luck.

Giving their audience the first taste of what this album has to offer, the talented twosome performed at an exclusive album launch party at London’s Thousand Island on the eve before the LP dropped. Here is what went down at the pre album release gig.

Kicking off The Luck’s evening, older material manifests itself into the succinct ten track set. The first of the earlier offerings ‘True North’ songwriting tackles the overriding theme of self-confidence issues yet in the end having the bravery to overcome these struggles with finding a place of serenity, brought to a live setting with the duos harmonization perfectly executing the poignant lyrism. Similarly, song ‘Muscles and Bones’ share comparable lyrics as the duo sing lines in unity regarding the feeling of insecurity and being broken as an individual including “Muscles and bones when you’re looking at me/I’m falling apart I’m torn at the seams/I’m broken into bits of what I used to be” in a totally acoustic rendition of the track.

On the other hand, newer material from the latest album by large dominates the performances as the majority of the ‘Ready To Run’ track listing such as songs ‘Place In The Sun’, ‘Rise and Shine’ and title track ‘Ready To Run’ are reminiscent of a handful of the musical inspirations the sibling pair both share. Everyone from the Eagles to Fleetwood Mac signature sound is merged into The Lucks live showcase of their very own inspiring musicality.

Taking their talent for live performing across the UK festival circuit later this summer, The Luck are set to bring their fresh Folk-Pop meets modern Country sound as showcased during the pair’s album launch gig to the likes of River Cottage and Foundtown Festival to name just a few throughout this month. 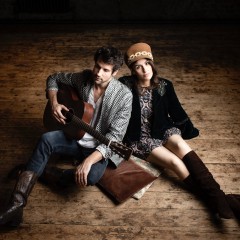 ‘Ready To Run’ is the breakout debut record from Americana/Country brother-sister band The Luck.