Not the Disney Princess you’re used to.

Mulan is a classic tale, it's certainly one of my favourite Disney films and it’s a great exploration of Chinese culture.

The Ballad of Mulan is a one woman show that puts emphasis on Mulan’s doubts, concerns and fears whilst still fighting every day to accomplish everything that comes with the war, just as good as a man – if not better. It’s very feministic and relevant for our time. Even though The Ballad of Mulan, the inspiration for the Disney Classic is an ancient tale, it still speaks to the way women are treated, not only in Asian culture but worldwide.

All the ingredients were there for it to be a great show full of empowerment and spirit, which it was in a way, however, something about the performance was lacking. It lacked a certain power, a certain dominating presence that was needed to bring the play alive. I noticed three people who had taken the opportunity to doze off during the slightly repetitive monologues.

The acting from Michelle Yim (the star) was strong and very well portrayed; I did in fact buy what she was selling. She did stumble over quite a few lines but hey, it was a one women show, she was her only prompt and that is not something I am holding against her. I just think Mulan’s story deserves a cast, an ensemble, it deserves more than just a chair on stage with a spotlight. It needed a healthy dose of spirit and fire that wasn’t conveyed as well as it could’ve been in the performance.

I wanted to feel her struggle, to feel how out of place she felt but to also feel her overcome it and rise up, like phoenix out of the ashes, having proved everyone wrong. I wanted to feel that she had not only saved her family honour, but she had saved herself as well, instead of being told it. The Ballad of Mulan was good at painting a picture of Mulan’s younger self and explaining that her ability and need to fight had always been with her, but it would have been nice to see that portrayed on stage.

Overall The Ballad of Mulan was a good effort but shouldn’t be afraid to take it further. The show is playing at the Power Room, Assembly Rooms in George St @ 16:05. 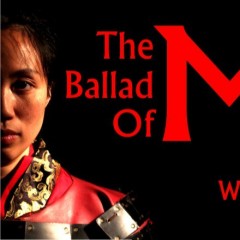 The Ballad Of Mulan

Not the Disney Princess you’re used to.