What do you want people to remember you by?

Leave a Message is a very interesting play about a young man who has been burdened with the task of clearing out his estranged, dead, alcoholic father’s flat.

It focuses on a specific moment in time and takes the audience through all the emotions associated with grief, loss, denial, anger and friendship.

The play was off to a bit of an awkward start, considering half of the audience didn’t realise the play had started. When the lead role casually walked down the aisle and fiddled around on stage it took people a minute to put their phones down and tune in. This was followed by a slow build up to get to the core of the story but once they were there, full appreciation for what the show was trying to accomplish kicked in.

Both lead actors were strong and had a great chemistry on stage that made their friendship, and the roles they both played in that friendship, very convincing. A nice addition to the second half of the performance was an introduction to the ensemble that really helped add more depth to the story.

The story being portrayed is difficult to depict in real time. All the breathing, sighing and staring into space that comes with the death of a disappointing parent is hard to convey without stunting the interest of the audience. That being said, especially in the second half, the lead actor playing Ed (the grieving son) did very well at keeping the momentum of the play going without losing any of the realism.

The set was perfect. It added even more feeling and depth to a tragic story, that is unfortunately, typical for a lot of people. It speaks to the nature of how a parent's actions, even if they were never around, impact their children. How a parent can, without even trying, damage their kid's lives just by being who they are; but the choice to be like them, or to be everything they weren’t, is a choice you can make, and as Ed learned, that choice is easier to make with a good friend around you.

Leave a Message is a great new play and it’s playing at the Gilded Balloon Patter Hoose daily @ 14:00. 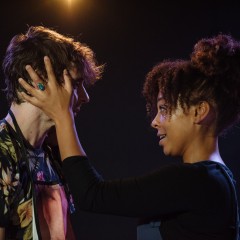 What do you want people to remember you by?