Whether there was only six or 600 of us, John Pendal performed with everything he had.

John Pendal was locked and loaded with giant, embarrassing childhood photos, cute cat pics and his very own shame-o-meter, which in case you don't know, are all the makings of a fabulous show.

Monster tells John's story: an autistic comedian, with a love of 3ft wide men, his therapist Abigail and a healthy amount of self loathing.

Whilst up on stage, John took the audience on a journey all over the emotional spectrum. He incited laughter when he shared with the audience his questionable fashion choices of Daisy Duke shorts, mullets and impersonating Sting at his first Pride Parade. "Hey it was 90's, nothing else was available."

He incited horror when he told the audience he had been subjected to seven years of gay conversion therapy – how is that even still legal – at the hands of the church. The twisted part of the story was that they were his only friends who then, in the truest biblical fashion, washed their hands of him when they realised he couldn't be "fixed".

If I had to summarise the show in one word, it's not a particularly sexy word, but I would say Monster was 'necessary'.

I myself do not suffer from autism or any mental health issues that I am aware of but I could relate to so much of what John was saying it is as if we had written the show together. I'm not sure whether that was his intention for Monster but it certainly is my biggest takeaway.

That is not to diminish those with mental health issues but knowing that regardless of whether we are diagnosed, or just a sucker for keeping to rules and strict guidelines (one of John's autistic traits), we can all relate to each other, one way or another, which should surely help reduce the stigma that those with mental health issues are faced with?

John has a way of connecting with the audience. He speaks about his life in such a manner that he really makes you, well feel. In this narcissist culture we live in, getting people who have no stake, no real investment in your struggle is an achievement all on its own.

Monster is playing at The Turret at The Gilded Balloon Teviot all month until the 26th August, except on the 16th as John will be at the sex workshop where he teaches, as he was the 2003 "International Mr Leather" champion. John Pendal everyone. 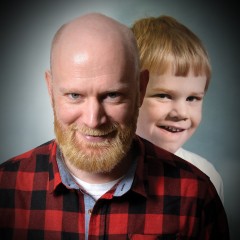 Whether there was only six or 600 of us, John Pendal performed with everything he had.