A show exploring femininity and sexualisation of the music and film industry whilst wanting all those things herself! The show is raucous and unafraid to be showstopping.

The show was presented as a gig more than a comedy act but it certainly delivered on the laughs. The mix of hilarity and music made for an entertaining show that was dripping in irony and commentary on sexualised musician performers.

Catherine was clear on her objective: to deliver a jaw-dropping show and to display herself as a superstar. The agenda was laid out at the off-set and she pulled it off. Mixing honesty with commentary and appearances with visuality, the show was captivating. It was funny, superficial and meaningful at the same time.

The jokes were far from PG but observant and relevant. The contrast between feminist messages through the lyrics against the cliched appearance of the singer using sex within her act show that women can have it all. It was commentating on old movies, cliched representations of women on film and unrealistic portrayals of femininity. Add in some outlandish appearances, heightened societal expectations, obsessions with gender roles and contradictory gendered expectations. Throw in a lot of sex jokes and that’s essentially the show!

Catherine herself was very talented and knew how to work the room. Again, there was a feel of community and LGBTQ awareness whilst retaining cutting jokes and hilarious banter. It was cabaret, show-stopping  glamour mixed with realistic imperfection. As she demanded from the start, craving attention and star power, the spotlight was all on her.

She had great comic timing, able to improvise and adapt. Not once did she lose her stride, even when tripping over a speaker and maintained her control and confident persona. Her voice and music ability is also wonderful, albeit used to comedic effect. The show crossed art forms including singing, dancing, comedy, cabaret showing the artist as multi-talented. 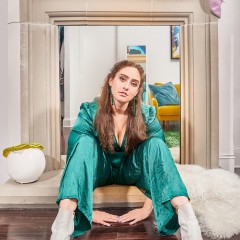 A show exploring femininity and sexualisation of the music and film industry whilst wanting all those things herself! The show is raucous and unafraid to be showstopping.