Belly-laugh one-liners and buckets of 90’s nostalgia; William Stone’s work in progress is on a roll.

I’m laughing before William Stone opens his mouth, let alone after. Entering the room with awkward aplomb, he has his audience giggling before he even takes the mic. From there, accompanied by a moss-adorned box of props he takes us on a surprisingly narrative collection of one-liners.

Stone has excellent comedy timing. His jokes are perfectly placed, and the spaces in between are just as funny; he draws out un-guessable punch lines with sinister silences. There’s nothing better than listening to jokes whose conclusion can’t be sussed until they’re complete, and Stone tells these by the barrel full, each one carefully written and skilfully performed.

As this wasn’t my first foray into the world of William Stone, I was interested to see how his one-liner built set would take to a 40-minute show. I wasn’t disappointed. He has clearly given this thought, sticking to his gag based guns but bringing in some new elements to break up the routine, including the aforementioned props and some hilarious pre-recorded voiceovers, to which he listens with seeming bewilderment.

Stone’s considered character shines through, not an easy task with a mainly joke based set. He has bizarrely managed to create a persona somewhere between kind of creepy and endearingly affable. His combination of discomfort and wild-eyed wonderment make him a joy to watch, and I’m put in mind of a far less innocent Father Ted’s Dougal Maguire, hairy baby jokes to boot.

It’s at this point I realise I haven’t commented on the fact that it’s a work in progress. Due to such a slick performance, it is easy to forget. As the show continues to build it would be great to see further dips into the mysterious on-stage box; it’s presence intensifies the air of uncertainty that Stone manages so aptly to create, and the various 90’s nostalgia it holds produces a lot of laughs.

Such reminiscence is a theme in the writing, with bizarre childhood references and anecdotes scattered amid hefty laugh out loud punch lines. His writing is strong throughout, a clear conscientious use of words, and none more deliberate than the irony in William Stone’s new title, Gathering Moss. As of course, he is anything but. 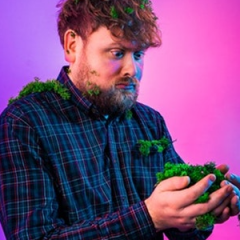 Belly-laugh one-liners and buckets of 90’s nostalgia; William Stone’s work in progress is on a roll.