The show was funny, the poems were imaginative and compelling but there are a few elements that need ironing out.

The venue that this show was performed in was extremely intimate. Perhaps too intimate. The repurposed shipping container could only seat 19 people, it was tight and close, not just for the audience members sitting in the benches but for the performer on stage. At times, it was extremely intense in a way that detracted from the show. With fewer audience members for the performer to focus upon it felt direct and awkward at times, there needed to be more room to relax, to step back and to bring a more comfortable atmosphere to the show.

However once you recovered from the immediate awkwardness of the intimacy that was felt by both Broccan Tyzack-Carlin and the audience alike, most of the content was funny and interesting. He had a unique perspective, whilst claiming the content was random and not sequenced, with no connection between topics, the whole show actually came together thematically nicely at the very end revealing to the audience that it was more coordinated than originally suggested.

The best parts of the show were when Tyzack-Carlin performed his poetry. The poems were intricate, cleverly written, heavily visual and full of wonderful imagination. They were narrative, and you could picture the story that was being told clearly. Each had a unique perspective and the stories told were endearing and captured your attention. He was brilliant at putting on personas, adopting different accents to the point you really started believing that the character was there in front of you reading that poem, even despite age differences or profile differences of the characters that were being portrayed. He really brought it all to life extremely vividly.

The parts of the show that slotted between the poems didn’t seem to work as well. They flowed less eloquently and weren’t as easily digested by the audience. Some jokes fell flat, others didn’t, some were misunderstood and some were hard to gauge. These parts of the show also went on for slightly too long but the observations were interesting, funny and justifiable if sometimes less effective in the way they were formatted into the show. He talks, for example, about the new Peter Rabbit and how it deviates from the original Beatrice Potter stories - with some valid, not previously considered points! His observations about fame selling more than talent, in terms of Jk Rowling legacy and trying to sell as Robert Galbraith were also accurate, although I will not stand to hear a word against the wonderful woman that invented and wrote Harry Potter.

In sum, the content was mostly funny, relevant and endearing. His poems were talented, interesting and easily visually digested and his anecdotes were humorous and exact if sometimes mis-delivered due to the nature of the show’s format. At times he attempted dark humour but seemed to overstep the line at points whilst other times hit the right tone exactly. It needs less time between poems and a less intense format. I will stress that Tyzack-Carlin is talented, his poems are amazing and comedy funny. 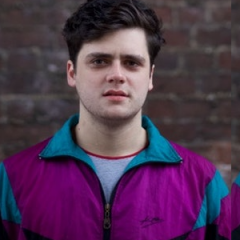 The show was funny, the poems were imaginative and compelling but there are a few elements that need ironing out.