Jess Robinson was an obviously well trained singer. It still managed to be dire.

I saw the Jess Robinson show at Theatre Severn, on the 26th of April 2019. Not that I'd recommend the experience.

Jess Glynne is playing. The atmosphere is relaxed, and the audience is talking.
Michael walks on, Jess Robinson's one man band. He nods and waves. The audience smiles back.
Jess Robinson comes on. She enthusiastically sings her first song, "Are you ready?"  Yeah! The audience mumble. As audiences generally do.
It tried to be funny "I've paid my council taxes, drank a bottle of tequila", but it somehow failed to get me laughing.


There was so much audience participation but we weren’t invited to sing along, so when she did sing, though she was a very talented singer, I just sat there awkwardly, vaguely enjoyably confused.
She was laughing throughout. I think she was trying to be relateable, but I felt like I'd walked in on her dress rehearsal rather than her live show.

So I slugged through what almost seemed to be a sometimes bizarre, sometimes trashy, one person talent show.
She sung a song. And then she rambled on for a bit. And then she dragged some poor man up on stage. I felt that the man she dragged from the audience had the audience laughing more than she did.
And then she did a song again.
It all felt so disingenuous that, in my opinion, it fell apart. Though the rest of the audience seemed to enjoy it.
She used lots of pre-recorded backing tracks. I personally would've liked to have seen more live. I would've liked to have perhaps seen split face make-up, rather than her pre-recorded "answerphone" every time she pretended to speak to a celebrity on the phone before singing a song.
And then the audience member who'd just escaped from the stage was serenaded, and called a "dirty cheating loverat". In my opinion, she was rude to both the audience and her band when she was trying to make fun of them. I felt rather uncomfortable during this.

In the midst of all my confusion, we had "celebrity volleyball". Michael gave out masks of different celebrities faces then a large inflatable volleyball was thrown around the audience.
Whichever "celebrity" touched the ball last, she performed a chosen song in their voice. It was a little meaningless to me, as I didn't know who the celebrities were, and I didn't know the song choices either. I think it would've been more interesting had she done a wider variety of voices. Perhaps some cartoon characters, or characters from children's shows, which a teenage audience may be more familiar with.

Then she performed a song about Niki Minaj having a day off. It was reasonably funny, but due to the music being too loud, I couldn't hear it. By this point I had lost interest anyway.

I have hearing difficulties. As such, whilst her impressions were generally accurate, they sometimes were hard for me to follow.
The show could've been far more accessible had they used the back screen to show the names of who she was impersonating.


She was a decent singer, but I think she needs to get someone else to write her script, use less pre-recorded material, and stop humiliating her, relatively capable, one man band. I have no idea what most of this show had to do with not having a filter, it all felt so fake that she may as well have put her "filter" back on. It was frustrating to watch two capable people produce something that was, in my opinion, awful. "It really is a seat of the pants show tonight". 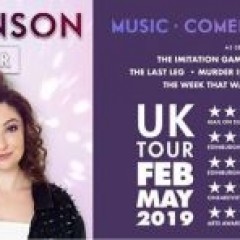 Jess Robinson was an obviously well trained singer. It still managed to be dire.