An interesting festival with some great exhibitions, but let down slightly by the organisation.

Before the day’s events kicked off, I managed a quick explore of the exhibitions in the Bonington Building, although admittedly not the ones I had planned to see. I asked at reception for information, a leaflet or a map but they didn’t have any information on the festival. There was nobody really around in the building so I explored it myself but didn’t find much of the artwork I’d come to see.

I waited in the café for the event I was about to take part in and whilst there got talking to an artist who was performing in the Festival. It was interested to hear about her experiences and hopefully I also helped her navigate Nottingham a bit easier. It’s this community and sharing experiences that is what makes international festivals like this so great.

I attended this event where a small group of us visited the NTU Lace Archives. We were treated to an interesting talk about the history of lace making in Nottingham, the way the machines worked, how to recognise various types of lace and we were able to view some beautiful samples of Nottingham lace as well as patterns and designs.

Admittedly this was supposed to be an introductory experience, whereas I had been researching lace making in Nottingham for two years at Brewhouse Yard Museum Stores, and the other participants were equally as knowledgeable through research and their own family history. However, the talk and tour was easily adapted to our level of knowledge and we were able to ask interesting questions such as how these particular collections were stored and accessed, how this collection is used by NTU students and professors today and what current projects were happening. It was interesting to focus on the design element of the lace as I had mostly been focusing on who had made it rather interpreting the patterns and themes within the lace design itself. We also learned closely how certain patterns and textures were made.

On arriving at Broadway Cinema I enquired at reception where the Dreamphone event was but they didn’t seem to know. They sent me downstairs to look for somebody called ‘Lee’ who I later discovered wasn’t at work that day. I ended up wandering around the meeting rooms and ‘backstage’ area of Broadway searching for the event - which is fine because I know my way around Broadway extremely well, but you have to wonder how visitors to Nottingham managed to navigate this.

Upon finding the artists we proceeded to play the DreamPhone Game. Now, those born in the 90s may remember a wonderfully sexist board game called ‘Dreamphone’, that every young girl wanted including myself. The game revolves around travelling around a board and a toy phone gave ‘hints’ as to which boy you might meet.

The game created by the artists followed a similar premise except rather than the ideals of gaining a boyfriend, it switched the goal of the game to millennial feminist expectations such as gaining a job, a roommate or a beer. Somehow it seemed like the game cluedo in that it dropped clues and hints which you crossed off from a sheet, but I didn’t really understand how to play... It doesn’t help that I find it hard to quickly digest written information due to being dyspraxic and dyslexic and it wasn’t extensively verbally explained to me.

I found the whole experience quite uncomfortable, especially due to the fact that we had to pass our phone number to a complete stranger and sit texting them. It felt like an invasion of privacy.

I asked at the desk once again and also spoke to someone who worked at Broadway but they didn’t seem to know where the exhibitions were. The person working at Broadway told me that they hadn’t been given much information or been briefed about it and there didn’t seem to be much signage or direction’s about where to go.

I browsed the entire building but couldn’t seem to find the short films which were advertised which was a shame as I had been looking forward to watching these. I found the gallery with the VR headsets but unfortunately these weren’t working when I visited.

The rest of my day I had planned to attend the exhibitions tour of Nottingham centre but unfortunately the game and my day had now ran over time and I missed the start of this. I decided instead to explore other exhibitions on my own accord over the next few days.

This was a fabulous exhibition showing eight artists exploring and celebrating Chinese New Year. I especially loved the paintings of the sky but also really enjoyed the sculptural forms which explored Chinese ideals and rhetoric as well as their relation with objects and things.

I also had a quick visit to see the works exhibited by a ceramicist and jeweller at Debbie Bryans. The shop itself is packed full of curiosities, the history of lace and contemporary design, so these items seemed a perfect match for its location. 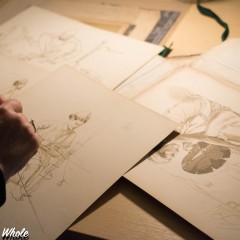 An interesting festival with some great exhibitions, but let down slightly by the organisation.