Baby, this show's got your back, like we're still seventeen...

17. An age full of drama, UCAS, boys, parties, stealing booze, smoking, smothering, terrible eyeshadow, swimsuits minus the swimming, eye-rolling, open days and SEX. 17 brilliantly tackles the pressures, both social and professional, that teenagers have to endure. What’s quite innovative about this piece, written by Frankie Meredith and presented by Wildcard Theatre, is that it tackles what it's like to be 17 right now, seduced by the further pressures of social media.

It’s fair to say that ‘17’ does live up to its glowing reviews. Within moments of starting, our two protagonists launch into an explosive bubble that the audience completely resonate and reminisce with. Energy is aplenty amongst our two schoolgirls, Casey (Emma James) and Yasmin (Annice Boparai), with their fire brimming through the whole play, even in its more sombre moments. Text-speech and the Estuary-English accent trickle all through their lively performances, as they maintain a fast-pace dynamic characteristic of the ever-moving fickle Generation Z. Other reviewers have commented on the words being swallowed up by the space and the actors, I couldn’t completely understand this comment myself as I was quite blown away with how they mastered spoken word, rap music and monologues, despite the loud laughs of the audience! The rap about ‘Anxiety’ features some pretty eclectic dancing I want to watch again.

In addition, James is the definition of versatility in human form; as she transforms into the mind of Yasmin’s new boyfriend, a narrator, and Yasmin’s comically cringey maths teacher who yearns for Yasmin’s ascent to her old university. A highlight of the piece projection of a social media timeline, with the actor’s forensic treatment of it as a timeline of criminal events, as if on a detective mission.

In terms of the plot, the play adopts the standard coming-of-age genre conventions with a fresh look at social media and consent. The spontaneous mood shift towards the second half of the piece is sudden and as watchable as the more light-hearted sections prior. Directors Balisha Karra and Finley-Rose Townsend have cleverly balanced the light and shade of teenage life very well, with comedy still being found in the darker moments.

The script, while successful in creating an accurate depiction of what it is like to be 17 in today’s world, also feels slightly under-worked. The flow of text sometimes doesn’t appear to rhyme when it should, or perhaps the infrequent rhyming couplets are unintentional? Either way it feels inconsistent. Yasmin’s treatment by the Police later on also feels slightly lost within the script, which I’m unsure is appropriate considering how highly talked about the theme of consent is in today’s society.

Nevertheless, 17 is a must-see for its raw depiction of the power of friendship amongst an adolescent labyrinth of challenges. 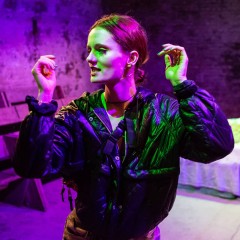 Baby, this show's got your back, like we're still seventeen...