An exciting, adventure-filled experience for kids and a wonderful throwback for adults

I don't know about anyone else, but I grew up reading Enid Blyton. As such, I was beyond excited when I heard about this shows - and worried it wouldn't do the brilliant story justice. I’m glad to say I had absolutely no reason to fear.

Gobbledigook Theatre wonderfully bring to life the first adventure Julian, Dick, Anne, George and Timmy ever had. The four actors play their characters well, managing to play young children without being too irritating or forced (although Julian’s exaggeratedly posh voice does grate slightly). Aunt Fanny and Uncle Quentin are portrayed through hand puppetry of a sort, which is done very cleverly, and Timmy is a puppet that each actor handles well, and appears surprisingly lifelike.

The children in the audience are involved plenty of times throughout the show; they hold the parachute that represents the sea, create a storm using water pistols that are then turned on them, and help build Kirrin Island. The inclusion of kids is excellently done and captures their attention and interest far better than many kids’ shows I’ve seen.

There’s some groan-worthy jokes and a hilariously sassy explanation of what ‘ingots’ are by a tiny girl in the audience, but the best part by far is reliving the story, as the Five find the well on the island, and the ingots, and are…well, I won’t spoil it for anyone who hasn’t seen it yet. But believe me, regardless of your age, if you read The Famous Five, you will love this show. It feels like you’re a kid again. And when George reads the final line of the first book at the end, then gifts it to a child in the audience, wishing them luck on their adventures, it’s a genuinely touching moment. Enid Blyton’s stories will be read by children for generations to come, and I am so glad Gobbledigook Theatre took on - and pulled off - the challenge of bringing one of them to life.

The Famous Five is on at 14:30 at C Venues - C - until August 27th. For more information and to purchase tickets, visit the EdFringe website. 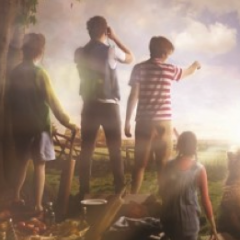 An exciting, adventure-filled experience for kids and a wonderful throwback for adults