Andrew Silverwood’s Reformed Terrorist tells hyperbolic tales of how Argos works, getting stuck in waterslides and his protest past.

If you’re one for long anecdotes, then this show is for you. For me, it dragged on a little and although the long 'jokes' or anecdotes were observing things from our everyday lives, I wouldn’t exactly call them ‘observational.’ I learnt nothing new about the inner workings of Argos, nor did I need to spend six minutes being told exactly how it works, with no witty observations or ironic annotations mentioned. Yes, if you haven’t heard of Argos before it may sound funny, but Argos in itself isn't funny enough to be a joke.

The setting for Silverwood’s show is a very, very intimate back-room, and if it wasn’t for a few people on the ‘front row’ howling at his jokes, I would have been very bored. I kept waiting for the show to start. He shared his experiences of protests gone wrong, of getting stuck on waterslides, of Thai Airways - possibly interesting stories if you’re there for storytelling but this claims to be a comedy set, where were the jokes? Silverwood is, indeed, a good storyteller with plenty of energy and vigour to his set. He enjoys a good chit-chat with the audience, talking to a woman from Australia and often cracking private jokes with her about all things Ozzy, although it would have helped if he shared the joke with the room. She seemed amused at least.

This was a random collection of hyperbolic anecdotes that didn’t seem to fit together as a show. The sort of stories you forget immediately after hearing them. If Silverwood wasn’t such a charismatic character I would have been bored, but I guess you could say it was a mildly entertaining hour.

If you have some spare time, check out Andrew Silverwood, and if you can start a conversation and get an in-joke going you’ll probably have a good time. 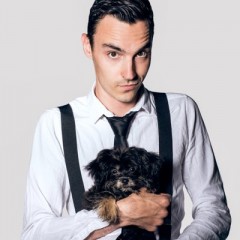 Andrew Silverwood’s Reformed Terrorist tells hyperbolic tales of how Argos works, getting stuck in waterslides and his protest past.