Bramble Wallace’s one-woman performance in 'Am I If?' address female issues ranging from menstruation and female preoccupations with beauty to what feminism means in the modern age.

Bramble Wallace’s one-woman performance in ‘Am I If?’ feels particularly relevant in light of the #meetoo and #timesup movements, where the female voice is at the forefront.

Set in various locations (a laundrette, a bus stop, a flat etc.,) Bramble discusses everyday female experiences, seamlessly moving from the present day to flashbacks from her past. Her captivating performance is even more commendable for being only 30 minutes in duration whilst employing minimal props.

Bramble tackles feminine issues such as menstruation, bodily hair etc., with both sincerity and humour, although you can’t help but wince when she proudly displays a pair of knickers brandishing a large stain from her last period. The stark contrast of fantasy versus reality is particularly thought provoking as she amusingly discusses sanitary towel adverts versus the reality of being home alone, curled up on the sofa with menstrual cramps and hot water bottle in situ.

She convincingly touches upon what it means to be a ‘good woman’ and the female preoccupation with beauty and self-image. Does being a feminist mean shaving your legs but letting your armpit hair grow in full flow? Does drinking wheatgrass smoothies for breakfast, followed by yoga and an ethically sourced brunch mean you’re a modern, everyday woman? She questions the notion of the need for women to ‘have it all’. It seems only to disempower women, as they strenuously try to keep up with a superficial image of femininity, feeling disconnected and often second guessing their own instincts. What if we want to be nothing and do nothing?

Bramble poignantly discusses feminine anger and aggression, a topic seldom acknowledged in social media. Why do women feel compelled to portray themselves as calm and in control, when secretly wanting to smash all the plates in the kitchen? ‘The need to be silent and discreet, just like the blood that we bleed’ she poetically muses.

As well as her engaging and comedic reflections of daily life, she also addresses more painful issues such as loss of female friendships and feelings of abandonment; ‘unmet expectations are the silent killer of all relationships’. Her spoken word recital at the end of the play is particularly touching; ‘breathe’, ‘be strong’ she utters. Amen sister.

A commendable and heartfelt portrayal of what it means to be a woman in the modern era. 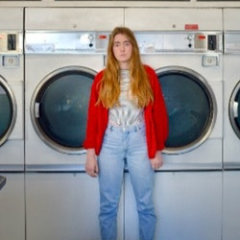 Bramble Wallace’s one-woman performance in 'Am I If?' address female issues ranging from menstruation and female preoccupations with beauty to what feminism means in the modern age.