It’s all about you and your opinions… so get in touch!

Two chairs. Two guys called Barry. Too much banter. Too much Dad dancing. Too little connection.

Before sounding too much like a Spice Girls song from the 1990s, I believe that Rosana Cade and Eilidh MacAskill have really pulled off weird, kooky theatre in their latest piece MOOT MOOT.

MOOT MOOT follows the story of two radio hosts Barry and Barry: matching costumes, moustaches, language and vocal tone in tow. Identically geared up with the same banter playfully bopped back and forth like a mechanically engineered tennis match. Joined with quite standard radio host phrases I’m sure we’ve all heard, like ‘Get in touch in all the usual ways, same as everyday!’ and an eerily fixed, perfunctory soundscape it becomes clear something surreal is going to happen here.

Before long the anticipated build-up begins to wind down and we’re trapped in a never-ending feedback loop with hosts desperately seeking to break the viciously cadenced cycle before them. The hosts frantically churn out multiple, ludicrous questions to their ‘audience’, aiming to seek some kind of connection… really anything at all. ‘Are you an outdoors or indoors person?’, ‘Have you been outdoors today? Did you enjoy it? Get in touch!’ All suggestions appear tamed and conservative.

With the piece being titled MOOT MOOT, surely I can’t be over splurging too much with this information. The mute they are ‘greeted’ with is simply white noise. Broadly speaking, could it be inferred that the duo behind the piece are suggesting that society is trapped in its own bubble of confirmation bias and endless, confusing nonsense? Are we that brainwashed by the world that we cannot simply formulate our own opinions independently, without checking with others to discover if we are the only people thinking this way? The Barrys are keen to ‘have a real conversation’, endlessly conjuring up ways to somehow provoke their audience, but what happens when air time cannot be filled? An emptiness absolves, where the identical cardboard cut-outs are faced to actually share their own opinions.

I really enjoyed this piece, I felt it was very subtle yet excellently executed. Movements were slick, language was clear and colours were minimal. Increasingly allowing the concept and the audience’s subconscious and own opinions to navigate the piece. Both actors were amazingly grounded and held the floor triumphantly, It wasn't until the very end that I realised that the two performers were actually women. Their mannerisms were spot on, skilfully played with such precision in their body language and energies.

Spooky, sinister and skilful I am very excited about what this duo will concoct next. 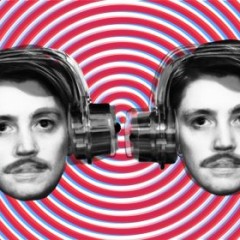 It’s all about you and your opinions… so get in touch!