Tim Vine has an abundance of energy and as a result his show is an hour of fast-paced, relentless comedy that will keep you on your toes and might even leave you exhausted by the end.

The puns are brilliant, as always, although as many that make you laugh will make you groan at how obvious they are. That said, you'll never have thought of them, that's for certain!

Elaborate handmade props fly around the stage, used for just one gag most of the time, and you have to admire the lengths Vine is willing to go to for his jokes. He returns occasionally to the same gags (with slight differences), weaving them cleverly throughout the show and guaranteeing a laugh each time they're mentioned.

He is self-deprecating and witty, and quick to bring back the audience when a joke falls flat. The first and last 15 minutes were, I found, funnier than the half an hour between them, during which the gags became stranger and more elaborate. That's not to say the entire show was not funny, however, simply that the middle chunk was less consistent in its laugh-out-loud jokes than the beginning and end.

Vine's energy is contagious, his puns are mostly brilliant and he is genuinely a pleasure to watch.

Tim Vine: Sunset Milk Idiot is on at Pleasance Courtyard at 16:00 until August 27th. For more information and to purchase tickets, visit the EdFringe website. 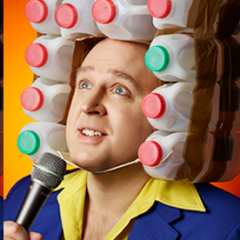