Voice MagReviewsMilton Jones is Out…

An hour of puns, politics and pondering guaranteed to make you laugh

Milton Jones is a master of one-liners. His witty, ingenious puns will often take you a moment to understand, and they're all the funnier for it. His deadpan style of delivery catches you off-guard when juxtaposed with the bizarre and ridiculous things coming out of his mouth.

Props are used in abundance and often only for one joke; such elaborate set-ups show Jones' commitment to his craft. The show offers an insight into his fascinating mind, and the seemingly random nature of his gags reflects his busy brain.

Jones makes some astute political comments but always under the guise of comedy; a particularly hilarious conversation between different country's flags is a definite highlight of the show. He feeds well off the audience, occasionally asking for suggestions for puns, and is quick to make fun of any particularly strange laughs from audience members.

The laughs are mostly consistent - although some of the puns elicit groans instead - and the show flows well, with few lulls in momentum. While Jones might seem very calm and almost without energy, he is actually full of it and this translates to the audience, keeping them alert and engaged most of the time.

It is very difficult to sustain an hour of one-liners, and Jones pulls it off impressively to create an hour of great comedy.

Milton Jones is Out There is on at Assembly Hall at 19:30 until August 20th. For more information and to purchase tickets, visit the EdFringe website. 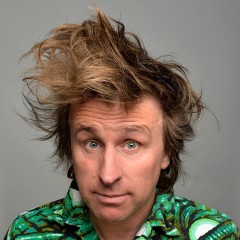 Milton Jones is Out There

An hour of puns, politics and pondering guaranteed to make you laugh