A gripping, disturbing tale told in a slightly bizarre way

Olwen Davies and Ollie Smith bring to life Edgar Allen Poe's tale 'The Black Cat' in this show, but not in the way you might expect. Instead of performing the adapted script in the conventional way, they sit at desks and read it to the audience.

This still brings it to life, as they read well and convincingly play their respective parts. Staging it this way is interesting, and certainly proves that tension can be built without movement, although perhaps not quite as effectively. The chemistry between Davies and Smith is particularly impressive, as they rarely look at each other, but at the audience.

The play also makes an interesting comment on our view of adaptations, and how loyal we are to original versions of stories. The commentary between scenes, however, became slightly irritating as it interrupted the flow of the story, and was rarely as amusing as it was perhaps intended. It's at these points that the actors get up and move around, which draws more attention to their inactivity while reading, but achieves little else.

The story is a brilliant one, and it's read well. The concept of the play is an interesting one, but it isn't executed quite as successfully. The best part of this show is Poe's tale itself - the rest is mediocre.

The Black Cat is on at Underbelly, Cowgate at 19:20 until August 20th. For more information and to purchase tickets, visit the EdFringe website. 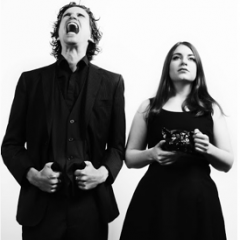 A gripping, disturbing tale told in a slightly bizarre way