Singing, dancing, stamping, serenading, clapping and free beer - what more could you want?

As the audience enters the hall, nine young men wander around offering free beers and inviting people onstage with them to sit at a table and have a chat. The set is that of a traditional pub; warm, comfortable and inviting. Once everyone has a seat (and a drink), the show begins.

Choir of Man are nine extremely talented guys who can sing everything from Avicii to Katy Perry, traditional Scottish folk songs to Adele. Their foot-stamping, energetic opening number, 'Wake Me Up', will certainly do just that, and they'll have you mesmerised for the next hour with gorgeous acapella, breathtaking harmonies and heartfelt serenades.

There's acrobatics, tap dancing, and musical instruments of every kind. No, really, they play everything from the bagpipes to the ukelele! With incredibly powerful voices - including a bass who can reach impossibly low notes - their songs are full of energy, but they also do several quieter, more emotional numbers which also hit the mark perfectly.

And that's really the best thing about this show - it has heart. One of the guys does a sort of narration, introducing the audience to each man in the choir, and while it isn't completely clear whether they're playing characters or just being themselves, it's obvious that every one of them has a huge heart, and that they're all fast friends. This shines through in their performances and you can see how much fun they're having, which just makes the audience enjoy it even more.

This show is an hour of absolute, full-on, proper fun, and the sensational closing number (which is a bit like Anna Kendrick's cup song, but much better!) will mean you leave on a high. Plus, they'll keep offering you more beer, so you'll never go thirsty!

Choir of Man is on at Assembly Rooms at 18:35 until August 27th, excluding the 14th. For more information and to purchase tickets, visit the EdFringe website. 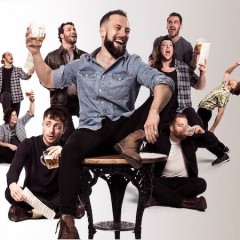 Singing, dancing, stamping, serenading, clapping and free beer - what more could you want?