Utterly brilliant - if we have to leave the EU, at least it has given us Brexit the Musical.

23rd June 2016. Despite what everyone believed, and what many hoped for - Britain voted for Brexit. This wasn't supposed to happen. No-one has a plan - but maybe there's hope. Only Boris can find the plan and save the day.

Brexit the Musical tells the story of an incompetent Tory government, a hippie opposition leader, conspiratorial plotting and a mission to try and fix the biggest catastrophe of modern day Britain. Opening on a referendum day scene with a cheery 'It's Democracy' refrain, we soon see a union jack underwear clad Boris being woken up by Michael Gove to learn that he has won. He is flabbergasted - what is he going to do? Then Dave resigns, the plan has fallen apart.

But there is hope - there might be a plan - and Boris along with Micheal the side-kick must find it. This heroic tale has been cleverly constructed around real events in British politics - complete with a Cameron's political suicide, a rigged leadership race and the beginning of May's uber conservative government. The show is stomach-achingly hilarious, with pointedly perfect caricatures of the main politicians at play. If you are concerned that this show may be a little anti-conservative you can be reassured that it also pokes fun at the Glastonbury-going, floor-sitting, leader of the opposition. No-one comes out unscathed, although admittedly some portrayals are more brutal than others - for example a particularly snooty Samantha Cameron. The casting was absolutely on point with uncanny likenesses for both the Boris and Dave characters.

The musical numbers are quirky confessionals of each major player - with stand out pieces including May's celebratory 'First of May' when she wins the leadership race. The production is self-aware, with May demanding the band stop as she scraps the liberal policy 'not for the privileged few' and begins preaching about her own 'totalitarian state' in a red bathed stage. The performance keeps just the right balance between humour and those aspects that might still be a little bit raw for some - giving us at least a night of relief where you can stop crying and laugh at Brexit. Staunch leave voters may not leave impressed, but at the end of the day the performance is mocking incompetent governments - not the people themselves.

The entire performance was well put together and slick, with costumes that were spot on, a fantastically British set, smooth and well incorporated scene changes, and brilliant lighting and effects. The whole production was faultless, it was astute, clever, fun and utterly brilliant. If we have to leave the EU, at least it has given us Brexit the Musical. 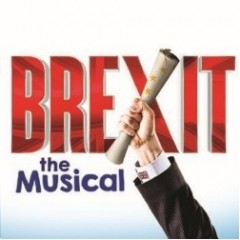 Utterly brilliant - if we have to leave the EU, at least it has given us Brexit the Musical.