Neither crazy nor funny enough to be interesting

Olaf Falafel spends an hour taking the audience on a journey that I can only imagine reflects what it's like to be in his brain. He begins with a musical number that features a questionable impression, then goes on to tell jokes and present bizarre philosophical musings in a random and convoluted order.

Perhaps the idea was to show how quickly our brains work and how many things we're thinking about at any one time. If that's the case it is an interesting concept, but one that was executed poorly. Few of the jokes were genuinely funny, and most of the laughs came from the sheer strangeness of what was said rather than amusement.

The marmosets in question were easily the funniest part of the show; hilarious musings about mundane concepts that were read out from a powerpoint slide. Unfortunately, there were only three of these in the entire show. This could be an area for development as these had potential, but there needed to be far more of them for them to be any kind of saving grace.

A large proportion of the show was spent preparing for Falafel's closing musical number, which featured members of the audience playing cleaning product based musical instruments while he sang. This was milked for far too long, and the rehearsal halfway through the show effectively killed any humour the finale may have had as we'd all already seen it.

Falafel is clearly willing to put himself out there and has plenty of crazy thoughts, but this show just isn't crazy or funny enough for me.

Olaf Falafel Presents: The Marmosets of My Mind is on at City Cafe at 16:15 until August 27th, excluding the 15th. For more information, visit the EdFringe website. 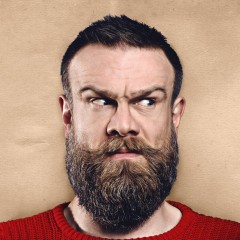 Olaf Falafel Presents: The Marmosets of My Mind

Neither crazy nor funny enough to be interesting