A vivid and visceral satire about the horrors of Guantanamo Bay

On our way in to Guantanamo Bay Resort we are greeted with Cuba Libres, directed to our deck chairs with our own private little patch of sand at our feet, while the tour guides cheerily welcome us into the resort.

Last Resort imagines Guantanamo Bay as a holiday resort - with all of the organised fun you would expect - our tour guides take us through pilates, a meditation, bingo, drinking games and a disco. But don't expect to be able to read any books as they will likely feature on the 'banned list'. Equally you probably wont be able to get too comfortable as the entire show is build on the suspense of what is coming next.

As a satire, Last Resort starts off quite funny - it is easy to laugh at the idea of a holiday in a place like Guantanamo Bay. However, as the show proceeds, it becomes less funny and more uncomfortable, and even a little scary when you don't know what's coming next. The immersive and inclusive nature of the show means that there is always a lingering fear that you will be picked on. Although the whole point of the show is to being out these emotions by placing you into a position where the rug is swept from under your feet. The meditation becomes far less relaxing when you are told to imagine a plastic bag being slipped over your head. Drinking games are a lot less fun when they resemble water-boarding.

Last Resort is an acutely intelligent show highlighting some of the horrific aspects of counter terrorism policy. The 'bingo' segment exemplifies this with statistics on real facts that seem utterly horrendous. The atrocities described and depicted are starkly contrasted with the luxuries of a holiday, making them all the more poignant.

Last Resort is not for the faint hearted - the experience of fear and anxiety it inspires is visceral. Through this truly incisive portrayal it vividly captures the horrors of imprisonment and torture that is legal under counter-terrorism law and it very much drives home its message that we cannot sit back in our deck chairs and let this be. 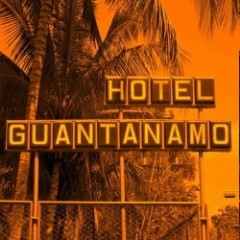 A vivid and visceral satire about the horrors of Guantanamo Bay