A one woman play about the experience of abortion, Mission Abort is a courageous and deeply moving show

A stark set with a single examination table. Therese Ramstedt plays a 26-year-old working in the arts, who is about to have an abortion. Lying on the table, legs in the air, head hanging back to address the audience, her vulnerability, and the indignity of the situation is immediately captured.

She recounts her story, finding out she is pregnant, going back through the 'options for conception' and then telling her boyfriend, making the decision to have the abortion and going through the actual process of booking appointments, until we catch back up and she is once again on the examination table.

At first the circumstances were almost funny - particularly recounting the ways she might have become pregnant, or the reactions of others around her. The scene changes were interspersed with various relevant recordings, from pregnancy test and morning after pill adverts to Donald Trump's controversial interviews on abortion.

The show very quickly moved from a little bit funny to being quite difficult and hard-hitting, with a very real portrayal of waiting in a telephone queue to book an appointment, and the experience of actually going into the clinic. The representation of abortion itself was uncomfortable to watch as we see the young woman on the examination table, in pain with vaccuuming noises to represent the act itself.

Throughout, the portrayal of women's bodies is frank, with Therese feeling her breasts in explaining how they had changed, and afterwards, describing the pain and the bleeding. There is no holding back in this production, and the stark portrayal of the experience makes it a poignant and meaningful show. In no way was this show attempting to moralise, or scare women away from abortion - throughout the woman reiterates that it was always the right decision, and she has no regrets. But that doesn't mean it doesn't affect her physically and emotionally, and this show is encouraging a frank portrayal and open dialogue about the experience - noting that while one in three women have had abortions, the character doesn't know if any of the women around her have because they don't talk about it.

This show was incredibly well executed. The interaction with the audience was awkward, but in a performance with such difficult themes, it may be understandable that people weren't eager to participate. Overall, it was brilliantly acted and incredibly emotive. 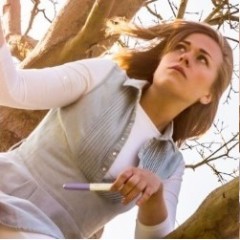 A one woman play about the experience of abortion, Mission Abort is a courageous and deeply moving show