A hilarious and incredibly take on the classic murder mystery

A vintage room bathed in red light, jazz music in the background. Detective Sebastian Greyweather jumps up to narrate the series of events that have occurred with the help of his assistant Jenkins, found amongst the audience members, who is able to give him the clues as to how these tragic events transpired.

The event? A three-legged race

A notable object? A potato

What is distinctive about this potato? It is radioactive

And so begins the Tale of the Radioactive Potato. We immediately meet some of the characters of this murder mystery in scene setting sequence - two three legged race competitors and their parents, and a French chef. Which is kindly interrupted by our detective-cum-narrator who introduces each by their Cluedo-inspired, colour-based name. This conveniently matched a series of colour based cards which Jenkins used to secretly let the detective know who had died and whodunnit.

On with the show. What transpired was a hilarious series of typical murder mystery tropes, with the typical murder scene discovery, accusatory flashbacks and ultimately, the reveal. The cast were absolutely fantastic, dealing with such a ridiculous storyline, and the whole show was incredibly clever, proving how talented they were to be acting off-the-cuff, and making a coherent show that actually, mostly, made sense. There were a few physical issues, such as a mic that wouldn't stay put and the cast enjoyed putting each other in difficult positions to garner laughs from the audience. Alongside the typical events of a murder mystery there was toilet humour, jokes about the Frenchman and a fair bit of physical comedy, adding to the quaintly British feel of the whole thing.

The show was laugh out loud funny, and the cast often had to wait for the audience to stop laughing before they could continue on. It wasn't slick or perfect - it was improvised comedy after all and this just added to the humour of it. This was a truly entertaining and hilarious take on the murder mystery and absolutely not one to miss. 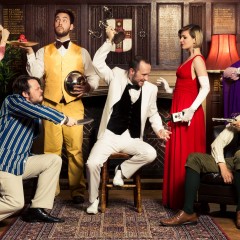 A hilarious and incredibly take on the classic murder mystery