What does creating a gas mask out of a water bottle, sewing an orange skin back onto an orange, and making a spear head out of a spoon have in common?

Well, according to co-creator by Nigel Barrett it's a "hallucination of an apocalypse about to occur". At an empty University of Salford building, including small office rooms and large empty library, audiences are invited to immerse themselves in believing, for a short few hours, that the end of the world is happening. We were the ones lucky enough to be at a party.

With at least twenty security guards, we walk alone down a quiet, dirty, dark concrete corridor and arrive to help ourselves to unlimited DIY martinis and mojitos (and mocktails so I could also enjoy). Suddenly, we are invited to close our eyes and imagine of the end of the world. Ovrwhelmingly loud music plays, and we are taken into the atrium of the once used building. From above, party hats and song lyrics flutter from the sky. We sing, dance, and then getting increasingly louder – to the extent that it felt real – helicopter and 'drone' sounds take over the atmosphere and we are thrown into chaos. With freedom to roam around three floors of small office rooms that have been re-appropriated for the event, crowds are invited to explore, with no guidance. Therefore the opening line to my review was what I experienced at this performance.

Then, an appalling turn of events. After only 45 minutes – of which it could have easily been double, or at least allow everyone 30 minutes more – was the sudden and frantic evacuation of the building. Our skills have been learnt, now it's time for the party. We were moved in darkness to an empty library. Here a large party is had by all. The creators are renowned for forthcoming, engaging and experimental works, and the building, aesthetics, and activities were brilliant, but this just seemed like an exceptionally well curated amateur placing together of 'random' workshops - that just so happened to have thousands of pounds.

I only happened to explore 40% of the rooms on offer and I understand that this is amazing as my decisions literally determine the outcome of the work for me as an individual, but the lack of consistency with those involved in the work in keeping the belief that it's the end of the world meant that, sometimes, it felt a little empty. 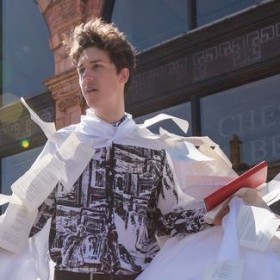 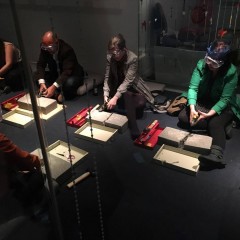 ​Party Skills for the End of the World review

What does creating a gas mask out of a water bottle, sewing an orange skin back onto an orange, and making a spear head out of a spoon have in common?