The event took the typical book club structure of an interview, however was perfectly pitched to the younger audience with the discussion kept simple and entertaining. This was interspersed with a series of readings from Walliams' books including the story of Windy Mindy from The World's Worst Children. He describes this as the book for 'reluctant readers', and it was certainly silly and fun enough to engage the children in this audience. His readings were animated and energetic, with brilliant character voices to bring his wonderful writing to life, with illustrations from the books shown on the huge screen behind as the story was told. Other readings included sections from Gangsta Granny and Ratburger.

The discussion was really interesting too, exploring the things that inspired his writing, from personal experiences and people he knew, which feature in his books, to literary influences and the impact of Roald Dahl, author of his favourite book Charlie and the Chocolate Factory. Asked about the huge success of his novels, not only on the page but also the screen, the discussion turned to the adaptations of his work, and we even saw a clip from Walliams' cameo as the dinnerlady in the recent TV film of Billionare Boy.

The event was perfect for kids and equally as funny for their parents. Walliams' seemed at home with the children, and was particularly engaging when it came to questions at the end. Ten lucky children were picked to ask questions and these were also the receivers of signed book box sets from Walliams himself. The whole audience were up on their feet waving their hands in the air desperate to be picked. The questions asked were brilliant, showing just how much Walliams has engaged his young readership. With both kids and adults alike cheering and laughing throughout, Walliams' event was a wonderful start to the festival, and one which will be hard to follow! 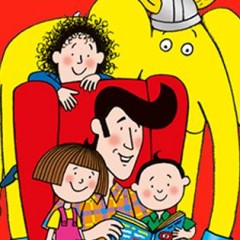