Two Man Show is actually a three woman show, with one playing the accompanying music and the other two exploring the relationship between gender identities, language and expression.

We are told that they want to explore the 'crisis of masculinity' and so they portray to us the fractured relationship between two brothers, whose father is dying. Interspersed with this are various dance pieces on different expressive themes, with one staging images of femininity and another as a stereotypical and satirical masculine fight. These women aren't afraid to push the boundaries in an effort to make a statement, or even normalise the ideas they are putting forward. At various times the women perform topless or naked, but rather than being gratuitous it is about female expression, which if you don't quite get the first time round is articulately and assertively explained for you later on.

Their comedy really hits the nail on the head across a lot of different issues, and was evidently relatable or identifiable for much of the audience due to the overwhelmingly positive reaction. The humour was sharp and clever, subverting many conventions in order to satirise common approaches to gender and identity. At times their ability to lay bare the preconceived ideas we have within society was actually disconcerting, but highly effective.

RashDash are funny, energetic women who want to make their voices heard, but where voice and language fail they beautifully combine different art forms of theatre, music and dance. As well as being incredible actors they are talented dancers and musicians, all with incredible voices. Even those who disagree with their message couldn't deny that their performance was stunning. However, they demonstrate their message so effectively, even internalising potential audience objections during a very 'meta' break in the fourth wall in which 'John' doesn't break character, and so Helen is forced to justify the show in response to 'his' questioning. 'What's the point' he asks, and Helen answers 'Does it have to have a point?'

The show does have a 'point', but much of what happens within it is simply about embracing methods of female expression. Not everyone will enjoy this because not everyone will 'get' it, but that is the beauty of of this spectacular performance: you may well walk out thinking very differently to how you did before. This is an absolutely stunning creative work and an unforgettable performance.

Two Man Show is at Summerhall at the Museum at 20:15, until 27 Aug (excl 17 and 24). Tickets and more information are available on the EdFringe website. 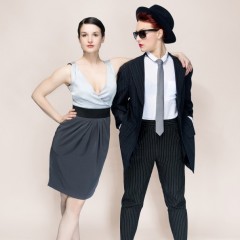