Cosy, warm and full of imagination: the perfect bedtime story

Held in the Lafayette of the Circus Hub, Bedtime Stories is stage in a circular circus style hall, and the floor round the edges is covered with soft cushions and cosy blankets where the children can curl up for the show. In the centre is a bed, with four screens above, projecting to every side of the circle. Paired with fairly lights, bunting and soft music this is a bedroom from your wildest dreams.

The story is about a little girl, who is so adventurous and imaginative that she won't go to sleep at night. Her busy mum gets frustrated at her daughter's antics, while the daughter is frustrated that her mum is always busy. Starting by telling her a story, we hear the mum read out the tale of the princess who becomes a bird, as the story is visually projected onto the screens above the bed. Throughout the show, these projections are visually stunning and the children in the audience were utterly mesmerised by them.

As the mum is called away by having work to do, the little girl ventures off into her imagination with her friend 'Three'; holding pillow fights and travelling off into space. This imaginative sequence becomes a series of impressive acrobatics routines, which move around the circular stage and use aerial silks to perform a spectacular act, which captivated the kids in the audience. However, lost in her imagination, her mum disappears and so she must go on a quest to find her, venturing through shark infested seas, a dark forest with a monster and a dark forest with a monster. It was particularly nice to see a show with a little girl in such an adventurous part, which is not often seen in theatre.

Paired with songs as well as the projections, this show is a treat for the senses. However, in quieter parts the children were sometimes getting restless, and the dialogue needed to be much louder to overcome the noise from the audience and the weather outside, in order to keep the attention of the kids. However, this was a brilliant show which really worked to show the power of the imagination in an exciting and engaging way for young children.

Bedtime Stories is on at the Underbelly Circus Hub until 22 August (excl 15). For tickets and more information, visit the Fringe website. 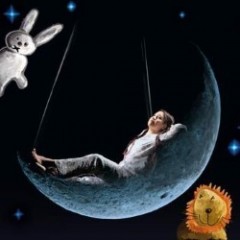 Cosy, warm and full of imagination: the perfect bedtime story