The absolute pinnacle of theatrical story-telling; which is what the whole show is about

An adventuring young boy from is magically captured by the aged King Arthur who has been living on earth for hundreds of years waiting to tell his story. The boy, and audience, are transported back to Arthur's youth to hear the legends of the sword in the stone - Excalibur - and Sir Lancealot. Rather than holding a continuous narrative, the show returns to older Arthur and the young boy, and invites the inclusion of other tales such as Sir Gawain and the Green Knight.

The story telling of the show was powerful, with a small cast and reasonably sparse set, they brought the stories of Camelot to life incredibly effectively. The set consisted of three large stones, which both made up different, moveable landscapes, as well as becoming the 'round table' when put together. Alongside this there were minimal props and costumes, giving the show enough of a basis to let the imagination fill in the rest.

Propelled to the throne by the act of pulling the sword from the stone, Arthur is guided by Merlin and his adorable hand operated dog, who is there to step in when Arthur needs protection. The storyline consists of well known legends and is kept simple and easy to follow - although with the actors playing multiple parts this may be easier for slightly older children to understand. This is also true of some of the themes, as Arthur being seduced by his half sister Morgana could be difficult for younger children.

However, the show was captivating for adults and children alike - visually through the use of costumes and clever staging, as well as through song and dance used at various times throughout the show, complimenting the medieval context and the storyline. Considering the lack of stage space the actors had to work with the show was well planned, with good choreography of the fight scenes.

There are moments of both drama and comedy, and David Gant as both the older Arthur and Merlin is incredibly moving. It is not often a show can pull off such well known stories as that of King Arthur, particularly as such adventure narratives are more difficult to stage, however, this show completely succeeds with utterly spell binding story-telling.

Michael Morpurgo's King Arthur is at Gilded Balloon at the Museum at 14:45, until 29 Aug (excl 16 and 22). Tickets and more information are available on the EdFringe website. 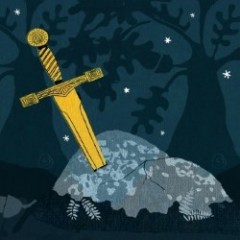 The absolute pinnacle of theatrical story-telling; which is what the whole show is about