A dark and clever take on an old classic.

A giant clock-cum-stair set sits in the middle of a stage bathed in smoke and purple light; setting the scene for a show which turns the already tipsy-turvy tale of Alice in Wonderland on its head.

The show opens on a stage filled with quirkily dressed dancers. This set the scene for a dark, but weird and wonderful atmosphere. As a narrator/announcer figure calls 'show your wristband for a drink' the audience soon realises that Wonderland has become a club.

A drunken Alice collapses and hits her head, plunging herself down the rabbit hole and into a tableau of familiar scenes as doctors try to treat her. A number of scenes use physical theatre, with brilliant staging and particularly clever links to what the 'real' Alice is physically suffering. The narrative is kept very simple, with the focus much more on visuals and individual scenes than a heavily plotted storyline, although as we moved along Alice's journey of self-discovery and ultimately fighting for her life, the simple plot reaches a meaningful culmination.

The familiar scenes and characters come with a new twist. The script, particularly for characters like the White Rabbit, was brilliantly written with speech becoming poetic and was evidently inspired not only by Carroll's original but the whole cultural history of these well-known characters.

It still maintained originality even with quirky modernisations and a feisty 21st Century Alice in a welcome move away from the quaint Disney cartoon. In some places, this modernisation did feel a little clunky, but the overall concept of updating the story worked well and was a refreshing adaptation.

The young actors at the Young Pleasance should be proud of producing such a visually impressive and well staged show. With Alice in Wonderland there is always a risk of exploiting an already tired tale; this show was anything but. Original and incredibly cleverly updated, Alice Unhinged is an intriguing and exciting adaptation of these well-loved characters.

Alice Unhinged is on at 13:30 in the Pleasance Courtyard until 20 August. For tickets and more information, visit the Fringe website. 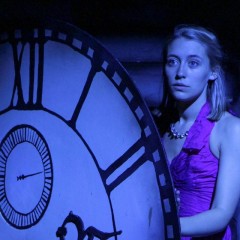 A dark and clever take on an old classic.