18-year-old Noah Altshuler works as playwright-in-residence at the Mark Twain House and Museum in Hartford, Connecticut. An enormous Twain fan, the young writer has produced a set of three short plays based on the popular novel Tom Sawyer, published in 1876 and based largely on Twain's own youth.

The Sawyer Studies are no more than an hour in total and are inspired by the novel, but in no way tied to it. Much of the language takes on the slang and joviality of teen-speak — perhaps in a manner that Tom Sawyer did, though updated for the modern audience — and the scenes take only part of the story. Tom's love of pirates threads its way through. Tom himself is mentioned outright in the first two, and alluded to in the last. The boundless energy and many niches off childhood and early love are taken on board wholeheartedly.

The Sawyer Studies is currently showing at Camden's Etcetera Theatre, an intimate, blacked out space above the Oxford Arms on Camden High Street. The set is stark, and it is up to the actors to work the space into being. This works well for the first two parts, where it is the vivacious lives of childhood and young adolescence that are shown. The imagination and sense of play form different places moment upon moment, school classrooms falling away to become pirate ships and battlegrounds with little more than two wooden desks. For the final part the space is used in a different, but equally effective manner, the audience forming the back rows of a funeral, actors momentarily addressing the crowd directly, sometimes turning, rolling eyes or smirking, at other times more openly questioning us as the congregation.

The acting varies, not so much in ability, but in style, and will perhaps refine towards more common threads as the performances advance. Ernest drama and comedy mix not always harmoniously, and classical, gutsy delivery clashes at times with a lighter and more contemporary touch. None feel entirely wrong for the tone of the play, but a more subtle flow between characters would provide a stronger glue for the three different sections. There are moments of brilliance from the actors. Tom Scurr is a commanding presence, his physicality and execution endlessly captivating. The moments of play between Rishi Nair, Jorge Franco IV (epic name), Jessica Strawson and Alexandra Vincent are delivered well for laughs, and there are hints here at the beginning of something really sharp.

It feels appropriate that the writer in this case is 18. Twain (then Samuel Clemens) was yet to make a mark as a writer at this age, but he understood childhood well. It is the first two of the three short plays which are the most effective of The Sawyer Studies, written for young characters to speak. Often when language is written for teen or child characters by adults it can feel a bit milked, here it is loose, fun and actually sounds like a moment on the playground might.

All in all this is a very promising play at the beginning of its run. The producers hope to move a full Altshuler-adaptation of Tom Sawyer to Broadway next year, and it'll be interesting to see how this develops. Most interesting, perhaps is watching how Altshuler himself develops over the next few years, already showing such promise.

The Sawyer Studies is showing at Etcetera, Camden until 6 December 2015. 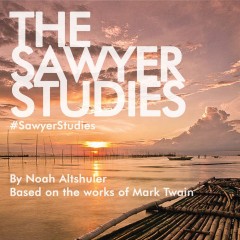 18-year-old Noah Altshuler works as playwright-in-residence at the Mark Twain House and Museum in Hartford, Connecticut. An enormous Twain fan, the young writer has produced a set of three short plays based on the popular novel Tom Sawyer, published in 1876 and based largely on Twain's own youth.