Voice MagReviewsFashion on the Ratio…

Yesterday I headed to a fun and enlightening talk at Bath Literature Festival. Fashion on the Ration focussed on the styles that sprung out of utility clothing and the surprising influence of Vogue during the war years.

Julie Summers, writer of Fashion on the Ration, a book that accompanies the WW2 clothing exhibition at the Imperial War Museum, began by explaining the two main changes to wartime wardrobe. First of all, utility clothing, which was brought in to cut down on factories making clothes, with items of clothing designed to be produced in long runs and last for a long time. Interestingly, to sell this idea in to the 40's style conscious women, top couturiers from Paris were brought in to design the garments in the most appealing way possible. Second was the idea of austerity, with new rules given to everything from the length of socks to the amount of buttons used per garment, saving wherever possible on materials.

Despite these cut backs, women were still expected to wear corsets, with 19 million lacing up, and a rule that all women in the forces must wear a corset underneath their uniforms. During the war years, corsets became even more uncomfortable than before, with the steel shortage leading to corset boning being fashioned from compressed cardboard! Surprisingly, most women welcomed this, as they were so used to wearing corsets, their corse strength wasn't as it would be for today's women, and it would actually feel pretty darn uncomfortable going without. There were some wonderfully inventive homemade underwear choices as well, with one beautiful lingerie set made from a silk RAF map, and a bra made out of two boyscout neckties.

Stockings were also a huge issue. Trousers were introduced for women to wear into work - something completely unsightly for the majority of the nation. One Leeds Uni professor even refused to teach girls who turned up without stockings. In 1940, a full ban on silk stockings led to women wearing uncomfortable and bagging alternative materials, and even painting stockings onto their legs, with a delicate line up the back.

Most surprising of all was the inclusion of Vogue magazine with many of the government's fashion decisions. Managing editor, Audrey Withers decided to work with the government to push agendas, making the previously unacceptable, fashionable. Firstly women were encouraged to wear bright colours, creating a mood of positivity and vibrancy - and rather misogynistically sounding now, to keep their men's spirits up. The idea that it was their patriotic duty to look as good as possible, was pushed onto women. They also ran a feature on glamorous women with short hair, after women working in factories were encouraged to cut their hair or wear it in a turban. Most out of character of all, they became the first UK magazine to run graphic images of Nazi concentration camps in1945 as they wanted to reflect the times, and not just create pretty images.

In one final government decision, men's clothing rationing was lifted a full 12 months before women's. The government realised that men returning from the war would need the positive feelings of a full suit on return, so they lifted the austerity regulations for demob suits, allowing a double breasted, three piece suit for the first time in years. Absolutely no one complained about this.

Although times were unimaginatively difficult, Summers reinforced quite how creative they were, women going to incredible lengths to hold things together. An interesting question raised at the end of discussions, was how Paris couture fared during the war years. Because they were invaded, there were no austerity laws, and in the face of occupation many weird and wonderful styles cropped up. What an interesting area to delve into next… 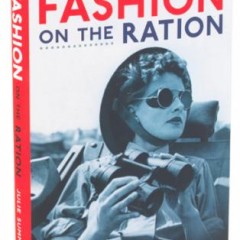 Fashion on the Ration

Yesterday I headed to a fun and enlightening talk at Bath Literature Festival. Fashion on the Ration focussed on the styles that sprung out of utility clothing and the surprising influence of Vogue during the war years. 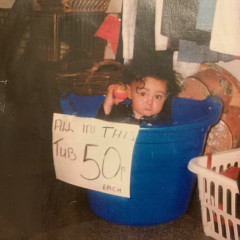