The recent TV adaptation may not have remained faithful, but it does shed new light on the classic.

Jed Mercurio's adaptation of one of the most notorious novels of the 20th Century probably left a lot to be desired for many viewers. The BBC's Lady Chatterley's Lover was a significant departure from D.H. Lawrence's novel, both excluding significant aspects and including new and equally significant events. However, the programme still followed the basic storyline; Clifford Chatterley becomes disabled and as his relationship with Lady Connie Chatterley breaks down she begins a relationship with the gamekeeper, Oliver Mellors.

The biggest aspect that many who have read the novel will miss is the physical aspect of their relationship. The opening to the show is a dramatic mine explosion, replacing the taboo discussion that is at the beginning of the novel. This change is interesting; the topic of sex is much less of a taboo today, however we do still identify with social injustice, which is well symbolised by the mines. Mercurio does significantly change elements of the story, but in doing so he taps into the more subtle, underlying theme of the novel. Social inequality can be as much of a taboo subject as sexual relationships, and this is particularly true of the time at which Lawrence was writing. We see the difficulties of confronting this issue surface through the various relationships between master, servant and lovers.

The adaptation illustrates the issues surrounding Clifford's disability well, how he struggles emotionally and its effect on their relationship and his identity as a husband. Equally, we feel the emotional struggle of Connie and Mellors through their affair, although the missing element of Mellors' wife does mean some depth is lost. While the adaptation is not a true representation of the novel, it does embellish some important issues, making it well worth seeing, even for those who love the original. 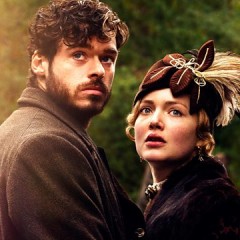 The recent TV adaptation may not have remained faithful, but it does shed new light on the classic.