Danny Wallace is a natural fit as a children's author, achieving that nigh on impossible adult trait of speaking to children as equals.

Danny Wallace is a man. We know this from his brilliant Shortlist column. We also know that he is a father, something that is mentioned many times in said column. His latest book, Hamish and the Worldstoppers was written with his son in mind and it was this that he was promoting at Bath Children's Literature Festival at the weekend.

Perhaps it is parenthood, but Danny Wallace is a natural with children. He gets the naughtiness, the disgustingness and the need for independence, and he appears to have poured all of this into his latest book. There was no sense of cuteness, superiority or 'speaking down', Wallace appearing in his natural habitat surrounded by pretty hyped-up children at this event. Children waved their arms in the air to answer all of his questions, yelped out ideas to contribute to a new illustration and one came excitedly up to the stage to draw a moustache on friend and illustrator Jamie Littler.

Littler provided illustrations for Hamish… and appeared alongside Wallace to create a range of monsters, beasts and book scenes on an overhead projector. One minute he was producing a cyclops, in a bowler hat, riding a banana to work, the next a 'terrible' character from the book. The pace and flourish with which this event took place appeared to reflect the writing within the book itself, a flow of visceral language and magnificent hyperbole. I felt a bit of a wally, as the only adult on my own, quite genuinely laughing along to the proceedings.

This was a one off event at Bath Children's Literature Festival. The festival continues until Sunday 4 October. You can read all about the book here 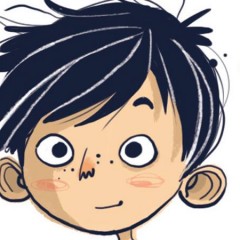 Danny Wallace is a natural fit as a children's author, achieving that nigh on impossible adult trait of speaking to children as equals.